Kōans are used in Zen Buddhism. Koans consist of a dialogue,  question, or statement, the meaning of which cannot be understood by rational thinking. Perhaps more precisely they are illogical or irrational.  By being irrational, the Reasoning function becomes confused and eventually, if the koan is repeated often enough, the Reasoning function gives up.  One widely repeated  kōan in Western literature is

Personally, I do not find this a good example, as it invites the mind to imagine one hand waving aimlessly about in the air.

Here are some far better examples taken from Zen literature, Zen Buddhism has developed this art of meaningless phrases to an art form……………

"Not even a thought has arisen; is there still a sin or not?"

"Does a dog have Buddha nature or not?"

"Without thinking of good or evil, show me your original face before your mother and father were born".

"What is the meaning of the ancestral teacher's coming from the west?"

Zhaozhou said, "The cypress tree in front of the hall".

Perhaps one of the most amusing pastimes one can have is reading the literature of western authors, with absolutely no understanding of what the koans are for, [but who like to think of themselves as experts in spirituality], who have sought to find some deep mystical meaning in these expressions – it is more comical than one can imagine and certainly does not still the mind!!

Zen has always specialised in nonsense as a means of stimulating the mind to go forward to that which is beyond senses …. The point … resides in its pointlessness and our bewildered reaction to its pointlessness. 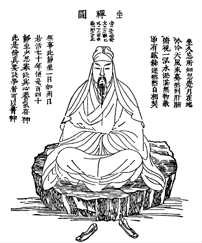