The Ka’aba (or Qaaba,  الكعبة‎) is a cuboid-shaped building in Mecca, Saudi Arabia, and is the most sacred site in Islam.  The building now has a mosque built around it, the Masjid al-Haram, but it has been a place of pilgrimage for many years.  Although these days it is considered a place for Muslims, it should more correctly be considered a ‘holy site’ and probably be accessible to all given its connections.  It can be traced back to Abraham, but probably goes back even further …..

The genuine antiquity of Caaba ascends beyond the Christian era: in describing the coast of the Red sea the Greek historian Diodorus has remarked, between the Thamudites and the Sabeans, a famous temple, whose superior sanctity was revered by all the Arabians; the linen of silken veil, which is annually renewed by the Turkish emperor, was first offered by the Homerites, who reigned seven hundred years before the time of Mohammad.

One of the Five Pillars of Islam requires every Muslim to perform the Hajj pilgrimage at least once in his or her lifetime if able to do so. These days the Hajj requires pilgrims to walk seven times around the Ka’aba in a counter-clockwise direction (as viewed from above). This circumambulation, the Tawaf, is also performed by pilgrims during the Umrah (lesser pilgrimage). However, the most dramatic times are during the Hajj, when hundreds of thousands of pilgrims gather to circle the building on the same day.

It is the walking that is key.  All that is needed is to walk and walk and walk, round and round and round.  In this way no learning is required and no memory, as long as you just follow the rest and plod in a steady rhythmic way, you are stilling the chattering mind.

I believe no one these days understands the purpose of such a ritual and simply treats it as a religious duty, but at one time, the act was intended to help in inducing a religious experience.  The black colour of the cube helps, because if you stare at the black colour it reduces sensory input and thus helps to reduce the number of perceptions which might be used for learning. 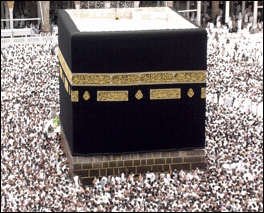