This is not a method that you can try or should try by yourself unless you have training in the technique and understand the process.  It is potentially dangerous.

It was well known to the gurus of Indian culture, but whether it still is, I do not know. It uses the ‘Anāhata’ -  the fourth primary chakra according to the Hindu Yogic and Tantric (Shakta) traditions.   The Anahata chakra is “positioned in the central channel behind the spine at the heart region, with its kshetram or superficial activation site actually in the heart region between the two breasts”.  Because of its association with touch, it is associated with the skin, and because of its association with actions of the hands, it is associated with the hands – see arms and hands.

The Sufis too also recognise these trigger points in a system called Lataif-e-sitta, and at the level of the heart there are 3 positioned horizontally. To the left of the chest is the Qalb, or heart, the Ruh, on the right hand side of the chest, and the Sirr, or secret, of the innermost heart, between the two of them.

The Qalb is called the heart of the mystic, so in effect is the trigger point used to produce a spiritual experience. 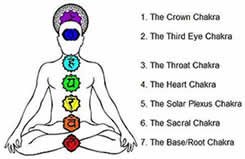 Unfortunately, in both Hindu and Sufi systems the exact location of these trigger points is not revealed [at least not to an outsider].

A person like me [so not a Hindu or Sufi] has to be content with the sort of vague diagrams produced to symbolically show the chakras shown left.

So a more precise system is needed and we have one in the Chinese systems of acupuncture or acupressure as well as the Japanese systems of Shiatsu so to use this you must go to a trained practitioner in these approaches.  Exactly the same associations occur in Shiatsu, for example as in yoga, but the zones of triggering are far more precisely defined because the objectives here are healing.

The technique requires the stimulation of two trigger points because heart and hand combine in a function dependency.

But gentle Vagus nerve stimulation (VNS) therapy using a pacemaker-like device implanted in the chest has been approved for treating drug-resistant cases of clinical depression.

So the gentleness here is key.