Playing the mouth harp or trump 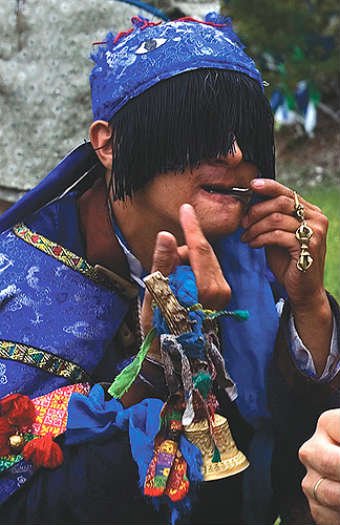 Occasionally it is referred to erroneously as the Jew’s harp although this name is misleading as the instrument is not a Jewish one, nor is it played by Jewish people.

It is actually native to Asia and used in all tribes of Turkic peoples in Asia where it is variously referred to as a temir komuz (literally, iron komuz), agiz komuzu (literally, mouth komuz), gubuz or doromb – see below for other names.

Besides the drum, the shaman uses two other musical instruments, one of which is a stringed instrument like the Russian balalaika (a kind of banjo), the other an instrument like that known as a jews' harp, a small frame with a long wooden or metal tongue, which is moved by the finger; the narrow end of the instrument is held between the teeth, so that the mouth acts as a sounding-board.

Among the Yakut the jews' harp, called homus (hamys), is apparently not a shaman's instrument, though the shamans of other Neo-Siberians have been known to use it.

Among the Buryat from Irkutsk, this instrument is called khur, and is used only by the shamans. This is also true of the Uriankhai. The Soïot call it komus.

It is thought to be one of the oldest musical instruments in the world; a musician playing it can be seen in a Chinese drawing from the 4th century BC.

Klementz mentions as the next accessory of the shaman the khur, with a wire tongue between the two side-pins, an implement largely in use among shamans. It may be met with, he says, from the sources of the Amur to the Ural, and from the Arctic Ocean down to Tashkent. Here and there it is merely a musical instrument.

Since trances are facilitated by droning sounds, the mouth harp has been associated with magic and has been a common instrument in shamanic rituals. 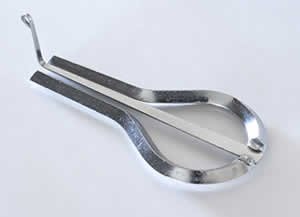 The instrument is plucked and consists of a flexible metal or bamboo tongue or reed attached to a frame. The tongue/reed is placed in the performer's mouth and plucked with the finger to produce a note.  In effect this instrument relies on the resonance of the plate and the oral cavity to produce its sound – it is thus ripe for producing a spiritual experience and indeed it was a favourite instrument of shamans.

The frame is held firmly against the performer's parted front teeth, using the jaw and mouth as a resonator, greatly increasing the volume of the instrument. The teeth must be parted sufficiently for the reed to vibrate freely, and the fleshy parts of the mouth should not come into contact with the reed to prevent damping of the vibrations. The note thus produced is constant in pitch, though by changing the shape of your mouth and the amount of air contained in it (and in some traditions closing the glottis) you can cause different overtones to sound and thus create melodies. The volume of the note can be varied by breathing in and out.

Whether you achieve resonance, however, is going to be a hit and miss affair, as it tends to be with all stimulation based approaches that rely on you achieving the resonant frequency of your own organs of the brain.

You will just need to experiment a bit, being aware that resonance may affect any number of organs and you should be careful not to stimulate any one organ for too long.