Playing checkers with yourself 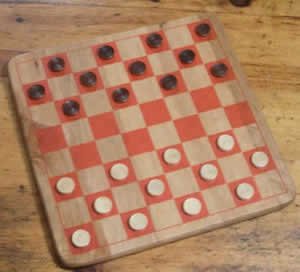 Checkers is the American word for ‘Draughts’ which is a board game.  It is unlike chess, in that the rules are simple, as are the pieces.

Traditionally the pieces are either black, red, or white and are all the same shape and size.  It is played on an eight-by-eight squared board (with sixty-four total squares) with twelve pieces on each side. The pieces move and capture diagonally. The opponent's pieces are captured by jumping over them.

They may only move forward until they reach the opposite end of the board, when they are crowned or kinged and may henceforth move and capture both backward and forward.

Draughts is played by two people, on opposite sides of a playing board, alternating moves.

But if you play with yourself and you take the process seriously so that you become wholly absorbed in the game and also ensure you try to intentionally win from both points of view you are both confusing your system of Reason and stilling the Learning process.

Overall – therefore -  it works via Befuddling, but it is quite a subtle form of befuddling.  By concentrating upon only one activity, by being absorbed in only one sequence of actions, then you have in effect starved the Learning process at the same time as you are confusing your Reasoning process.   In effect it is the constant attempts at trying to be two people at once that helps with confusing the Reasoning system enough to mean it gives up without seeking alternative ‘amusement’ or stimulation.  Once the Will has been subdued, then the Composer can take over.