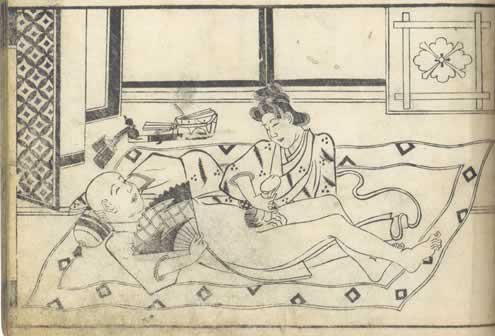 Throws in Ninpo show immense variety.  Once you have learned the individual throwing techniques, you move on to combining the throws.  This means understanding their flow and practising it and also forms part of randori – free practise.

Tokui waza should really be interpreted as divine techniques, only available to those destined to learn them through consistent training in the arts.

But the allusion is very clear……

Toda Shinzaburo Masahide of the Togakure-ryu said ‘one should be neither strong nor weak, neither soft nor hard.  Leave such thoughts behind, awaken to the Void and make your body null to abide by this.

This means in Budo, it is naïve to get caught up in thoughts of strong weak or soft/hard; in the end even concepts such as skilful/unskilful simply fade away.

The book from which I have quoted is based on euphemisms using one word as a code word for others.  The sword is your penis, and there are wooden swords which means that somewhere in the process false penises may be used.

All the more frustrating that they aren’t described!

The history of combat also demonstrates that only one out of every forty eight great victories was won by regular frontal attack.  As a Budoka might say, the other forty seven were ‘unnatural’ forms which broke the mold.  But the martial arts are unnatural in this way, they do lie outside the limits of conventional wisdom.