Negative pressure therapy is a very unique form of controlled breathing.  It is mechanically assisted breathing and in tests appears to have very marked effects on healing of lung diseases as well as promoting relaxation.

Autobiography of a Yogi – Paramahansa Yogananda
Dr Alvan L Barach of the College of Physicians and Surgeons in New York has originated a local lung-rest therapy that is restoring health to many tuberculosis sufferers.  The New York Times of Feb. l, l947, quoted Dr. Barach as follows:

"The effect of cessation of breathing on the central nervous system is of considerable interest. The impulse for movement of the voluntary muscles in the extremities is strikingly diminished.  The patient may lie in the chamber for hours without moving his hands or changing position. The desire to smoke disappears when voluntary respiration stops, even in patients who have been accustomed to smoke two packages of cigarettes daily. In many instances the relaxation is of such a nature that the patient does not require amusement."

In 1951 Dr. Barach publicly confirmed the value of the treatment, which, he said,

"not only rests the lungs but also the entire body, and, seemingly, the mind. The heart, for example, has its work decreased by a third. Our subjects stop worrying.  "

From these facts, one begins to understand how it is possible for yogis to sit motionless for long periods without mental or bodily urge toward restless activity.  Though ordinary men must remain in an equalizing pressure chamber to obtain certain benefits of non-breathing, the yogi needs nothing but the Kriya Yoga technique to receive rewards in body and mind, and in soul-awareness.

This technique must be one of the oddest in the group of voluntary techniques.  Its origins are very clearly medical, the apparatus described was successfully used to treat TB and also other pulmonary diseases as well as polio victims.  You perhaps know them as ‘iron lungs’, but the name has so many negative connotations that I prefer the more positive name of negative pressure therapy.

Some of the pioneering work of using these machines was carried out by Dr Alvan Barach and a tribute to him is provided on the site.  Dr Barach died in 1977.  Although many other people contributed to the development of the machine, it is to Dr Barach that I have turned to get a description of why this technique is a contributor to total relaxation and a very effective one. 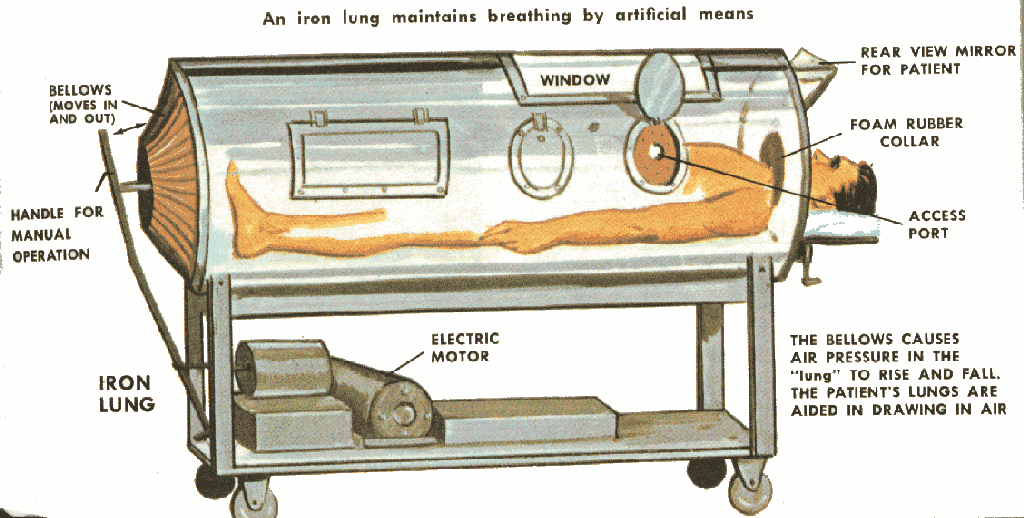 How it works/method of use

You don’t need to do anything, all you do is lie there.  In effect, the machine breathes for you.

Humans, like most other animals, breathe by negative pressure breathing: the rib cage expands and the diaphragm contracts, expanding the chest cavity. This causes the pressure in the chest cavity to decrease, and the lungs expand to fill the space. This, in turn, causes the pressure of the air inside the lungs to decrease (it becomes negative, relative to the atmosphere), and air flows into the lungs from the atmosphere: inhalation.

When the diaphragm relaxes, the reverse happens and the person exhales.

A person using a negative pressure ventilator is placed into the central chamber, a cylindrical steel drum. A door allowing the head and neck to remain free is then closed, forming a sealed, air-tight compartment enclosing the rest of the person's body.

In this manner, the machine mimics the physiological action of breathing: by periodically altering intrathoracic pressure, it causes air to flow in and out of the lungs. The machine is thus a form of non-invasive therapy.

It also has a very profound effect upon the person’s mood – treatment/therapy of only a  relatively short time [say a few hours]  can result in a very very relaxed state.

Furthermore, as long as the surroundings in which the machine is used are pleasant and relaxing, quiet and non threatening; and as long as the type of machine used is comfortable inside minimising bodily discomfort then the person also undergoes a form of sensory deprivation. 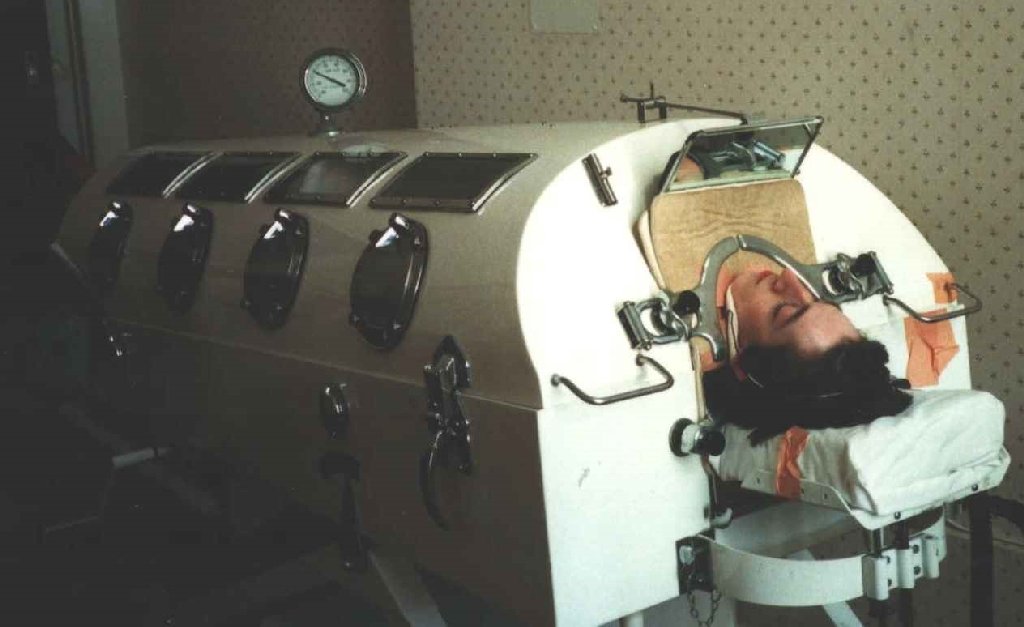