Aerobic exercise is generally performed at a moderate level of intensity over a relatively long period of time. For example, running a long distance at a moderate pace is an aerobic exercise, but sudden sprinting after the running would probably result in anaerobic results.

You need to exhaust your supplies of glucose and then go on to exceed your VO2 max, which means you really need to know what your VO2 max is.

Accurately measuring VO2 max involves a physical effort sufficient in duration and intensity to fully tax the aerobic energy system. In general, in both clinical and athletic testing, this usually involves a graded exercise test (either on a treadmill or on a cycle ergometer) in which exercise intensity is progressively increased while measuring ventilation and oxygen and carbon dioxide concentration of the inhaled and exhaled air. VO2 max is reached when oxygen consumption remains at steady state despite an increase in workload.

World class athletes typically have high VO2 maximums. World class male athletes, cyclists and cross-country skiers, for example, typically exceed 80 ml/kg/min and a rare few may exceed 90 ml/kg/min for men and 70 ml/kg/min for women. Three time Tour de France winner Greg LeMond is reported to have had a VO2 max of 92.5 at his peak - one of the highest ever recorded, while cross-country skier Bjørn Dæhlie measured 96 ml/kg/min. By comparison a competitive club athlete might achieve a VO2 max of around 70 ml/kg/min.  To be ‘oxygen deprived’ and thus to experience the high would require them to do an inordinate amount of exercise.

I, on the other hand, would probably achieve it within minutes – shortly before my heart packed up. 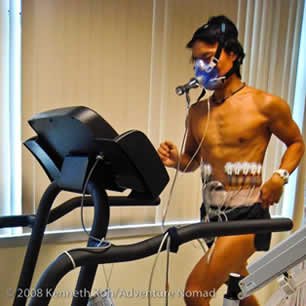 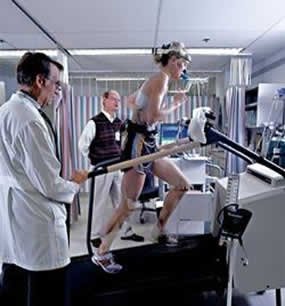