The eastern equivalent to the chant is the mantra. A mantra is a group of words that are considered capable of "creating spiritual transformation”. Mantras originated in the Vedic tradition of India, and later became an essential part of the Hindu tradition and a customary practice within Buddhism and Jainism.  The  Mantra is a single tone recitation.

It is worth noting that in Shaivism, the definition is more precise.

In Yoga, mantra corresponds to a sound formula which is the verbal expression of an archetype that represents a state of being, ultimately a divinity, and allows that being to be summoned.

The Hindu Rig Veda part of the collection of sacred texts known collectively as the Vedas contains about 1,000 hymns and poems.  Because much of the text of the Vedas is in ‘archaic language’ it is largely meaningless to anyone reciting them and the Vedangas provide an explanatory guide to the phonetics of pronunciation.  But the chants are ideal as a means of attaining a heightened awareness for the very reason they are meaningless. The text of the Vedas was intended to embody ‘power’ not meaning.

When a young Indian seeks help on the spiritual path from a ‘guru’ he is often given his own mantra “suited to his personal needs”.  The constant mental repetition of this, perhaps thousands of times a day [called japam] is said to “help in the reduction of the incessant production of imagery”.

The repetition of the mantra is often in cycles of “auspicious numbers”, one being 108.  I suspect they are only auspicious because they have seen to work at that number.  Here we have the combined use of counting and chanting, so two techniques combined.  Hindu malas (bead necklaces) containing 108 beads and a head bead are used to help in counting.  The person counts each bead using his/her fingers as he/she repeats the mantra. Having reached 108 repetitions, the devotee turns the mala around and starts again.

In the Hindu religion the use of a mantra is called Japa yoga.

... in the Hindu system, a mystic word, or mantram, is given to the student to repeat.

The meaning of mantram is '”that which keeps the mind steady and produces the proper effect”.  Its repetition is called japa.  So Japa yoga is communion with [the spiritual world] through the repetition of this name.  In the Catholic religion you see japa practised with the aid of a rosary.  In the Greek Orthodox church japa is their constant practise also.. and in Tibetan Tantric Buddhism, japa is the predominant practice.

We say it is the easiest because you need not go to a particular place nor have a particular time for it.  It is not somewhere outside you, but always within.  Wherever you are, your mantram is with you.... it is always in your heart, the most sacred place and that is why your mantram is to be kept sacred and secret, you don't even reveal it to others, lest you lose the reverence for it.

By repeating it constantly, a part of the mind gets linked to that.

It is like a person who goes down into a tunnel with a life rope tied around the waist and one end of the rope fixed to a peg outside the tunnel.  Whenever there is a danger he can just shake the rope and get pulled out.  In the same way, a part of your mind is tied to [the spiritual world] through the mantram while the other part is engaged in worldly pursuits.  You dive deep to get all the pearls you want to gather – name, fame, money, position, friends, anything you want.  You need not stay away from anything as long as you do not lose hold of the rope. A sensible climber sees to that first, and even pulls it a few times to see whether it is strong enough.  Only after making sure does he begin climb.

'As you think so you become'

Knowingly or unknowingly, you imbibe the qualities of the thing named

That is why the right name has to be selected.  Any word could help you keep the mind focused, but some names might lead you into difficulty later on.  A 'holy' name which will elevate your mind should be taken as a mantram. 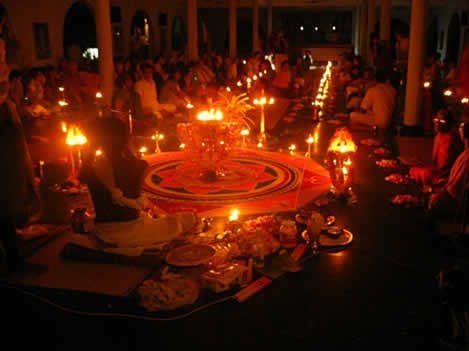