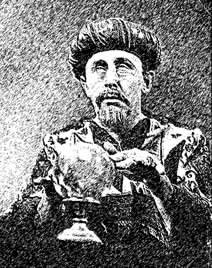 Another way of Befuddling the Reasoning system is to stare at anything reflective or smooth and shiny.

This was one of the purposes of the ‘crystal ball’ in gypsy ‘fortune telling’ – the images invoked in the trance state were superimposed on the ball in ‘the mind’s eye’.

The mind is confused by the images – the reflections and internal images.  But you have to stare at them for a while to still the Reasoning system, which means that ultimately the real mechanism by which this works is Sensory deprivation. 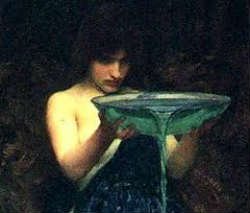 Jacob Boehme, on one occasion, passed into a trance through gazing at a burnished pewter dish.  He then found he could ‘look into the principles and deepest foundation of things’ .

Two old books published in the 1800s - Andrew Lang’s ‘The Making of Religion – Chapter V – Crystal Visions, Savage and Civilised’; and A Goodrich-Freer’s ‘Recent Experiments in Crystal Vision’, both provide examples of the crystal being used in this way.

If you get an hallucination, it  is superimposed on the crystal itself.  In a way, the crystal acts like a screen on which the hallucination can be projected.  As such the use of a crystal ball has a great advantage over the other methods because one can get images with a crystal ball, with some of the other Befuddling methods you will not obtain an image because you are having to use your eyes to provide the input needed to Befuddle.

I found crystal to be especially effective – if we take the number of observations -  but other objects mentioned within this category include glass balls, mirrors [see mirror gazing and hall of mirrors], a drop of blood or ink, and various objects having a reflective surface such as beryl or other gems, the blade of a sword, a ball of polished stone or even the nail polished finger nail!

So effective was the crystal ball in the Middle Ages that it was banned by the Christian Church as “the work of evil spirits”, and the Specularii – as they were then called – were looked upon as heretics and treated accordingly.  They continued, however, to flourish, and the art lingered on till the sixteenth century, when it received a new impetus and reached its highest development in the hands of the famous Dr John Dee (1527-1608), whose ‘shew-stone’ is now to be seen in the British Museum.  His seer – a man named Kelly – professed not only to see various spirits in the crystal, but also to hear them speak, and long conversations were carried on with them.

But see John Dee’s description for a perhaps different slant on this.

Among savage methods of provoking hallucinations whence knowledge may be supernormally obtained, various forms of ‘crystal-gazing’ are the most curious.  We find the habit of looking into water, usually in a vessel, preferably a glass vessel, among Red Indians (Lejeune), Romans (Varro, cited in Civitas Dei, ii, Africans of Fez (Leo Africanus); while Maoris use a drop of blood (Taylor), Egyptians use ink (Lane), and Australian savages employ a ball of polished stone, into which the seer ‘puts himself’ to descry the results of an expedition.

I have already given, in the Introduction, Ellis’s record of the Polynesian case.  A hole being dug in the door of his house, and filled with water, the priest looks for a vision of the thief who has carried off stolen goods.  The Polynesian theory is that the god carries the spirit of the thief over the water, in which it is reflected.  Lejeune’s Red Indians make their patients gaze into the water, in which they will see the pictures of the things in the way of food or medicine that will do them good.  In modern language, the instinctive knowledge existing implicitly in the patient’s subconsciousness is thus brought into the range of his ordinary consciousness.

One may add that treasure-seekers among the Huille-che ‘look earnestly’ for what they want to find ’into a smooth slab of black stone, which I suppose to be basalt.’

For the Iroquois, Mrs. Erminie Smith supplies information about the crystal.  ’Placed in a gourd of water, it could render visible the apparition of a person who has bewitched another.’  She gives a case in European times of a medicine-man who found the witch’s habitat, but got only an indistinct view of her face.  On a second trial he was successful.

Dr. Callaway gives the Zulu practice, where the chief ’sees what will happen by looking into the vessel.’ The Shamans of Siberia and Eastern Russia employ the same method.

Here, then, we find the belief that hallucinations can be induced by one or other form of crystal-gazing, in ancient Peru, on the other side of the continent among the Huille-che, in Fez, in Madagascar, in Siberia, among Apaches, Hurons, Iroquois, Australian black fellows, Maoris, and in Polynesia.  This is assuredly a wide range of geographical distribution.  We also find the practice in Greece (Pausanias, VII. xx, in Rome (Varro), in Egypt, and in India.

Though anthropologists have paid no attention to the subject, it was of course familiar to later Europe.  ‘Miss X’ has traced it among early Christians, in early Councils, in episcopal condemnations of specularii, and so to Dr. Dee, under James VI.; Aubrey; the Regent d’Orléans in St. Simon’s Memoirs; the modern mesmerists (Gregory, Mayo) and the mid-Victorian spiritualists, who, as usual, explained the phenomena, in their prehistoric way, by ‘spirits.’  Till this lady examined the subject, nobody had thought of remarking that a belief so universal had probably some basis of facts, or nobody if we except two professors of chemistry and physiology, Drs. Gregory and Mayo.