Pattern glare appears to have no clinical or scientific definition, despite its frequent use in scientific papers, however we can loosely define it as the effect brought on by busy images that have stripes, squares, or other odd patterns that affect the visual system by sending it images that have a ‘frequency’ component to the signal. Some people are particularly sensitive to strong patterns and flicker. However, the scientific evidence seems to point to the fact that everyone is sensitive at some frequencies.

Other sources of pattern glare can be the flicker from lights or a VDU screen.

Done deliberately watching pattern glare can produce very profound experiences – including out-of-body experiences, so there is something of a danger here that many games players may not realise.  And it can also produce migraine and even epilepsy, because of course the rate of flicker or the frequency of the signal acts as a stimulant and high frequency stimulation which is not in tune with the normal REM frequency can affect other organs.

You do need to take great care here as the activity is not inherently ‘safe’ because of this.  If you start to feel nauseous or feel a headache coming on, you are stimulating the wrong organs in the brain.

The effects can be accidental or patterns can be used deliberately.

Some patterns only work via befuddling -  by stilling the mind by confusing it, but there are examples of patterns that work specifically via Reverse REM, although they do have a befuddling component.

Even bathroom tiles with a busy pattern can produce pattern glare, particularly if the sunlight strikes them and there is flicker across the pattern.

There are some patterns and pictures that have been designed specifically to both befuddle the function of reason and cause reverse REM activity.  Some examples follow…. 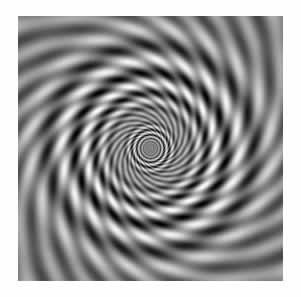 I found these on the Internet – freely available to anyone who wants to use them  - and many more can be found on other sites.