Some rocks, especially granite ones, can produce musical sounds when struck with another smaller rock.

Not all rock gongs produce sound that will produce an experience, but there is a lot of evidence that quite a number do – and they are often found in sacred places.  Some are clearly pock marked by holes showing years of use.  Some may heal, some may send you out of body.

Whereas the use of the rock gongs in Africa has continued and the art of using them not lost, all knowledge of the possible ‘rock gongs’ in Europe has been lost in prehistory.  The imagery is quite complex.  If you look closely at any granite rocks in ancient sites, you might be able to discern so called ‘cup and ring marks’, which are the signs of a well-used rock.  The place to hit the rock is often marked out with rings, which also has quite complex symbolism attached to it.  The central cup could be used in order to beat out the rhythm, the ring symbolism defines it as a place to obtain experience [to mark the right spot out amongst possibly many fissures in the rock] and the rings are symbolic of the ‘levels’ in the spiritual world to which one can go.

Cup and ring marks or cup marks are found mainly in Northern England, Scotland,  Ireland, Brittany, Switzerland, North West Italy, Thessalia, Central Greece and North West Spain and similar forms are also found throughout the world including Mexico, Brazil, Greece, and India where the oldest cup marks so far recorded are to be found in the Paeleolithic cave shelter site of Chattan. NOT ALL CUP AND RING MARKS ARE FOUND ON ROCK GONGS.  Some rocks map the constellations  using the cup and ring marker as a star system; they are maps of the heavens, but because all the sacred geography places were aligned so that what was below mapped what was above, they are also a map of where to find all the sacred sites in the region.

Thus, if you hit one of these rocks expecting to hear a sound you may be disappointed, because either it is actually a map, or alternatively they may only produce infrasound.  But amongst the ones that appear to be ‘silent’ you do occasionally have rock gongs with very complex pitches and these can be both heard and felt.

The use of lithophones dates back as far as the Paleolithic.  In the caves in France and Spain which are filled with those marvellous rock paintings, you will also find that many of the stalactites and stalagmites are also rock gongs.  Stalagmites in the Grotte de Clamouse in Languedoc, France, for example produce audible musical sounds when struck, but in some caves, it is clear that again the complex nature of the pitches of some of the very large stalagmites and stalactites also produce infrasound.  Close examination of some of the formations has even revealed small painted symbols indicating where they should be struck and percussion marks so old they have been covered by the calcite deposits of thousands of years.

We tend to think that spiritual experiences in caves is achieved principally by sensory deprivation; but it can also be achieved via sound, which is why caves were regarded as sacred places – they offered multiple mechanisms of experience.

In the following examples, I have tried to select stones from all over the world to show how very common rock gongs are and also how extraordinarily common the marking of the gongs is – nearly all have the inevitable cup, but also the rings.

On the Karetski peninsula on the eastern side of Lake Onega north of St Petersburg in Russia, there is a very good example of a rock gong.  It is a flat thick rock that lies across a fissure that runs 10 meters [33 feet] down to the water.  It is in an area of prehistoric rock carvings.  When it is struck with a piece of wood, the slab emits a very low bass sound that can be heard right across the peninsula a distance of well over 2 miles away.  Sound that carries in this way indicates the presence of infrasound, even though there is clearly some audible sound too.

IN ESTONIA: Reviewing the earliest report

At a meeting of the Estonian Learned Society 150 years ago Johann Samuel Boubrig (1788–1852) spoke about the ancient religion of Estonians as it was practised in the parish of Otepää, Southeast Estonia. Among other things Boubrig also mentioned a sacred grove of coniferous trees located a few verst1 from Palupera Estate, which in ancient times was used for sacrificing to a deity Toor or Toro. A roughly cut quadrangular stone was reportedly found near the grove. The stone was cut wider in the bottom and reportedly displayed a variety of apparently hewn-in figures (allerlei wahrscheinlich eingehauene Figuren) as well as cup marks. Unfortunately the experts had not had the chance to inspect the stone since a few years prior to the mentioned meeting the stone had been immured into a building (Boubrig 1843: 92–93; Krohn 1894: 29).

Not a single prehistoric rock carving except cup-marks  has been found in Estonia so far.

Balaphetrish on the Scottish island of Tiree, has a granite boulder some 10 feet across that issues musical sounds when struck with a small hammerstone.  It is actually a glacial erratic, but is absolutely covered with prehistoric cup mark engravings.  Island people still make offerings to it in the forms of coins deposited in a hollow at the top of the boulder. 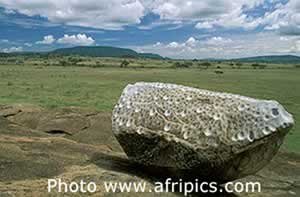 Africa has a huge number of lithophones.  Examples are known in Nigeria, Uganda, Tanzania, Burkina Faso, Kenya and Sudan.

At Birnin Kudu in Jigawa state, northern Nigeria, for example, there are rock gongs clustered in the close vicinity of the Dutsen Abude caves.  Bernard Fagg, a pioneer researcher into rock gongs working in the mid 20th century, experimented with tuning forks and found that the stones had been moved from the surrounding area and had been carefully selected for pitch.

Gong Rock in the Maasai homeland in the Serengiti is a ceremonial rock which stands almost alone on the plain and it is covered all over its surface with cup marks.

Rock gongs have also been found in the Nile valley particularly in Sudan.  The Third and the sixth Nile cataracts [see also waterfalls for symbolic significance of site] as well as the Fourth cataract are sites containing a considerable number.  On Ishashi Island at the Fourth cataract [which has now been flooded by the Merowe dam] researchers found 25 rock gongs and carvings and rock art nearby were often of ‘cattle’, which has a symbolic meaning in most cultures that relates to the creator and created. Researchers dated the site to Neolithic times.

The Kupgal petroglyph site in India, which was originally discovered in 1892 (though lost and rediscovered in the 21st century), includes a large number of rock gongs alongside rock art. The site dates to the Neolithic period.

Many of the motifs on the rocks are of cattle, in particular the long-horned humped-back type found in southern India (Bos indicus) [horns, bull and cow ]. Some are of human-like figures, either on their own or accompanied by cattle. Some of these are in chains or with bows and arrows [both symbolic].

One rather literal minded researcher - a  Dr Boivin -  said that “the masculine nature of the engravings suggest that the people who made the images were men and were probably involved in herding cattle”.

Well no, what it indicates is probably that their shamans were male and they took on the persona of their cattle. These are spirit animals, not actual animals, many shaman seek out their ‘spirit animals’ in order to get help.  Some of the images are in locations so difficult to reach that it would have, according to Wikipedia, “required the artists to suspend themselves from an overhang to make the images”.  Or they could have just flow there – shamans can levitate – it is not a myth.

The locals these days have no idea what the rocks can be used for and simply refer the rock formations as the 'musical' rocks, but they are no different in formation to any of the other cup marked stones in the other examples.

Sadly, commercial quarrying in the area now poses a serious threat to the motifs. Some sections of the hill have already been destroyed by the quarrying for granite. A rock shelter to the north of the Kupgal hill with an even older rock art has been partially destroyed.

America too has numerous examples of rock gongs.

The Bowers museum in Santa Ana, California houses a 7 tonne rock that sits on a concrete plinth in the entrance courtyard.  This is called Bell Rock. 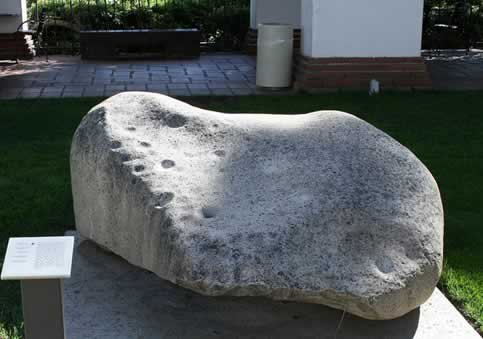 There are also other examples of ringing rocks in Southern California.  In the Chuckwalla mountains close to the border with Mexico a slab of rock rings with a pure metallic sound when struck with a small stone.  There is a 1,500 year old glyph etched into the top surface of the slab.  Its sound carries for considerable distances, which again indicates it is likely to have infrasound undertones in its pitch.

In a number of places where cup and ring markings are to be found, the markings have a SYMBOLIC MEANING and represent  the cosmic egg - the explanation for this can be found by following this link for the  MANDALA.  Not only will these symbolic images produce no sound at all, you may as a result of hitting them damage sacred markings that have survived for perhaps 4000 years or more.
Many marks in the Pennines, for example, are more likely to be symbolic markers of sacred sites - which is exciting enough in itself - hitting them with a rock would definitely result in flaking away of the surface of the stone (as you can see if you try it on rocks that do not contain the markings).

SO PLEASE UNDERSTAND THE SIGNIFICANCE OF THE MARKINGS BEFORE YOU TRY THIS
as we all want the marks to remain for future explorers to ponder. Absolutely the last thing we want to do is to end up destroying our collective heritage, a heritage that has survived millennia, particularly as the markings may be the only indicator we have that the site has a sacredness for other reasons - for example it may be a focal point of a great number of telluric currents, which would indeed be very special. 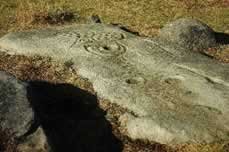