A psychomanteum or psychomantium is the correct name for a room with mirrors.  A Hall of Mirrors.  It should contain multiple mirrors.  It is a room which serves to befuddle the mind, by producing multiple images all of which will be stationary.  The objective is to place the mirrors so that they befuddle completely - confuse the Reasoning system.

The idea was used in Ancient Greece. Greek sites were discovered in modern times through descriptions in the writings of Homer. But the idea has never been lost because the  house of mirrors or hall of mirrors is a traditional attraction at funfairs (carnivals) and amusement parks – the home of carousels, big dippers, and helter-skelters.

The basic concept behind a house of mirrors is to be a maze-like puzzle. In addition to the maze, participants are also given mirrors as obstacles, and glass panes to parts of the maze they cannot yet get to. Sometimes the mirrors may be distorted because of different curves, convex, or concave in the glass to give the participants unusual and confusing reflections of themselves, the overall effect is to completely befuddle by confusing the person’s idea of their body image and by confusing their Reasoning system. 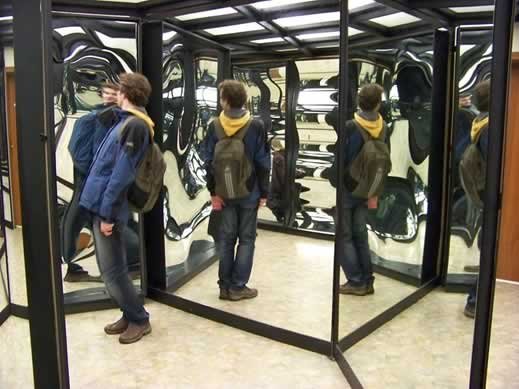 It was commissioned by King Louis XIV of France during the third building campaign of the Palace of Versailles (1678–1684).  Construction of the Hall of Mirrors began in 1678  To provide for the Hall of Mirrors as well as the salon de la guerre and the salon de la paix, which connect the grand appartement du roi with the grand appartement de la reine, architect Jules Hardouin-Mansart appropriated three rooms from each apartment as well as the terrace that separated the two apartments The principal feature of this famous hall is the seventeen mirror-clad arches that reflect the seventeen arcaded windows that overlook the gardens. Each arch contains twenty-one mirrors with a total complement of 357.

Louis XIV called himself the Sun king – he knew exactly what he was doing and the significance of the symbolism of his name.

Both these forms of Halls of Mirrors have the disadvantage that the person has to stand up and walk around to be Befuddled.