There are a number of techniques on this website geared towards removing things from memory that get in the way. Thus cure as opposed to prevention.   But there may still be memories left that haunt you, not hurt from others, not hurt you have done, not destructive learnt function – just bad memories.

Things that frightened you, perhaps as a child, things that you saw or were involved in – car accidents, someone being robbed or beaten, something that happened at school that humiliated you. An illness perhaps that caused you pain.  Something nasty or vicious on TV or in a film.

When I was a [very sensitive] child I was taken to Oklahoma – a musical which is classified these days as a U film.  But they had to take me out, because when it got to the scene of the haystack burning I became hysterical with fear.  And I haven’t forgotten it – nor the wardrobe in my bedroom, made of wood with faces of demons in the wood grain that stared down at me every night.

So what we are trying to ‘forget’ here are all the memories – incidents and facts [within our Database of facts] that can suddenly erupt into our conscious mind just when we least expect it and least want it – when we are trying to seek spiritual experience.

This technique is quite prominently discussed in the Cloud of Unknowing, as one would expect, but it is a very key part of many psychotherapy procedures too.

The Greeks were well aware of its importance and the concept was allegorically portrayed as Lethe – the river where you washed to forget.

Dante extended this notion in a rather comforting way by placing Lethe at the top of his 'Mountain'.

This was the Spiritual path he took whilst still alive and it affirms the possibility of forgetting by removing indexes to Perception in life.  Thus, when he had reached the top and entered his personal garden of Eden, all the bad memories he had were erased for him, so that he journeyed further only with 'good thoughts'. 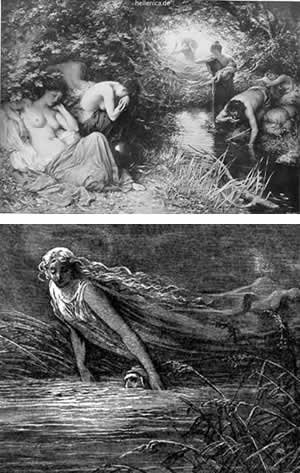 Dante also extended the concept by making his allegorical self enter another river, which only made accessible the better Perceptions.

From Dante's perspective, given that his was the allegorical journey of the mystic, the soul – freed from its memory of 'sins' and buoyed up by memories of good – was renewed and ready to face the next hurdle.

“The will is now corrected to love only the good, and the soul's appetite is now only for what is good”.

So Lethe and Eunoe do allegorically what the psychotherapist and hypnotherapist try to do.

You can go to a psychotherapist or hypnotherapist, but here is an extremely simple do-it-yourself method.  Get a sheet or paper laid out in the following way

So how do we ‘forget’ a perception we no longer want to know about?………… we ritually remove the index.  Take the sheet on which you wrote the memory – now erased  - and ritually cut away the perception from the now erased box and throw it away.  The index is then removed – the cross reference between the memory entry and its corresponding Perception is deleted.  What is more you have told your Subconscious that the perception is of no more use to you. You have learnt your lesson and the perception can disappear.  The humiliation caused by water skiing naked in front of 500 people after 2 bottles of third rate chianti is no more.