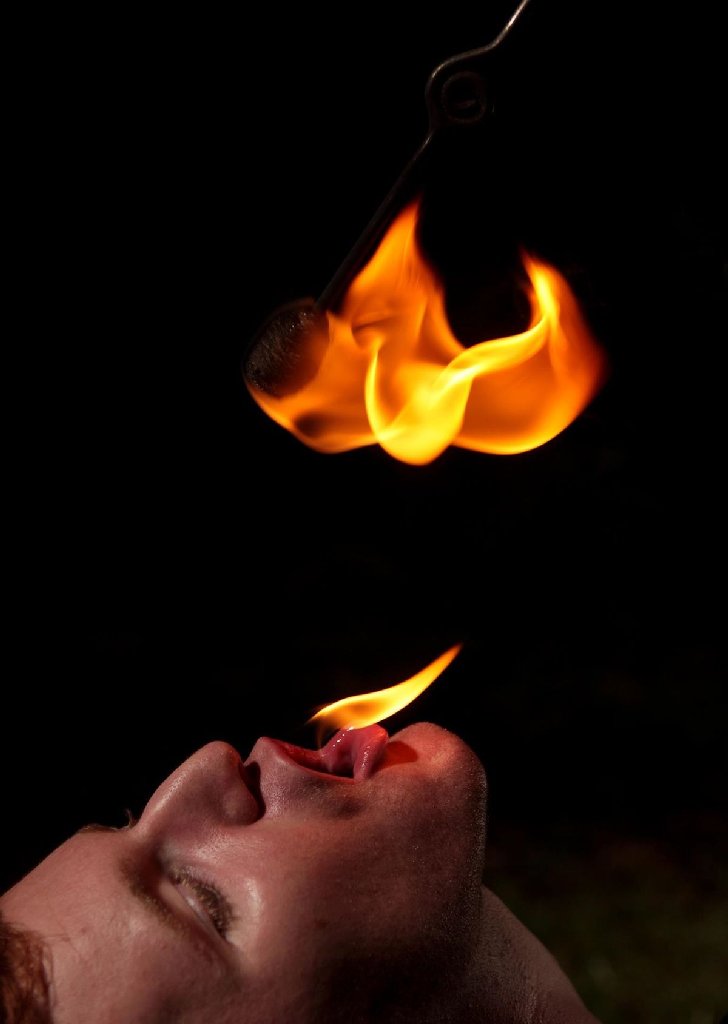 Fire eating, unlike fire walking, is a magic trick, although its roots and its symbolism are not dissimilar.

Strictly speaking therefore, it is not a method one uses spiritually.  But as at one time, the ability to ‘eat fire’ was claimed to be a supernatural one, some background information might be found helpful.

The following comes from Houdini and we have no idea whether he was telling the truth or not.

We emphasise most strongly not to try this, as the methods as Houdini describes them may not be correct.   Remember that Houdini’s objective later in life was to convince everyone that magic tricks always had a physical origin as opposed to a supernatural one, but he earned his money as a magician.

From Miracle Mongers And Their Methods By Houdini

The deception of breathing out flames, which at present excites, in a particular manner, the astonishment of the ignorant, is very ancient. When the slaves in Sicily, about a century and a half before our era, made a formidable insurrection, and avenged themselves in a cruel manner, for the severities which they had suffered, there was amongst them a Syrian named Eunus—a man of great craft and courage; who having passed through many scenes of life, had become acquainted with a variety of arts.

He pretended to have immediate communication with the gods; was the oracle and leader of his fellow-slaves; and, as is usual on such occasions confirmed his divine mission by miracles. When heated by enthusiasm and desirous of inspiring his followers with courage, he breathed flames or sparks among them from his mouth while he was addressing them. We are told by historians that for this purpose he pierced a nut shell at both ends, and, having filled it with some burning substance, put it into his mouth and breathed through it. 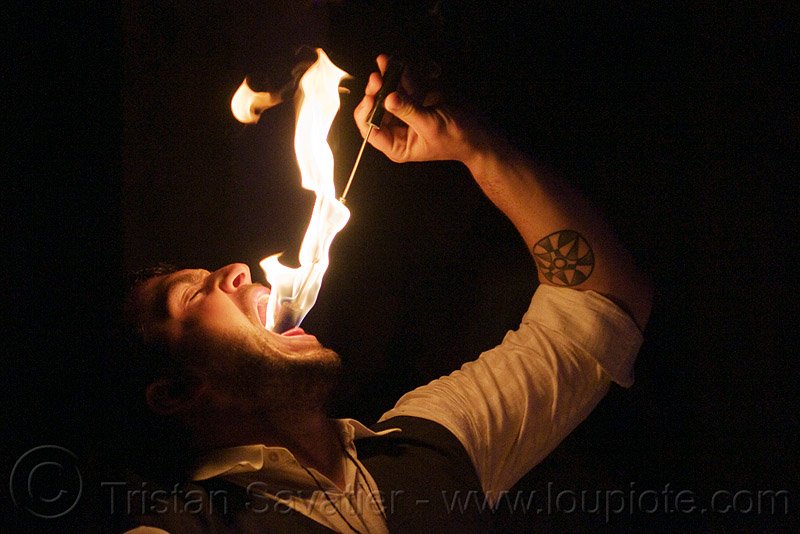 This deception, at present, is performed much better. The juggler rolls together some flax or hemp, so as to form a ball about the size of a walnut; sets it on fire; and suffers it to burn until it is nearly consumed; he then rolls round it, while burning, some more flax; and by these means the fire may be retained in it for a long time. When he wishes to exhibit he slips the ball unperceived into his mouth, and breathes through it; which again revives the fire, so that a number of weak sparks proceed from it; and the performer sustains no hurt, provided he inspire the air not through the mouth, but the nostrils. By this art the Rabbi Bar-Cocheba, in the reign of the Emperor Hadrian, made the credulous Jews believe that he was the hoped-for Messiah; and two centuries after, the Emperor Constantius was thrown into great terror when Valentinian informed him that he had seen one of the body-guards breathing out fire and flames in the evening.

Houdini then elaborates on the process saying that since Beckmann wrote, the method of producing smoke and sparks from the mouth has been still further improved.

From Miracle Mongers And Their Methods By Houdini 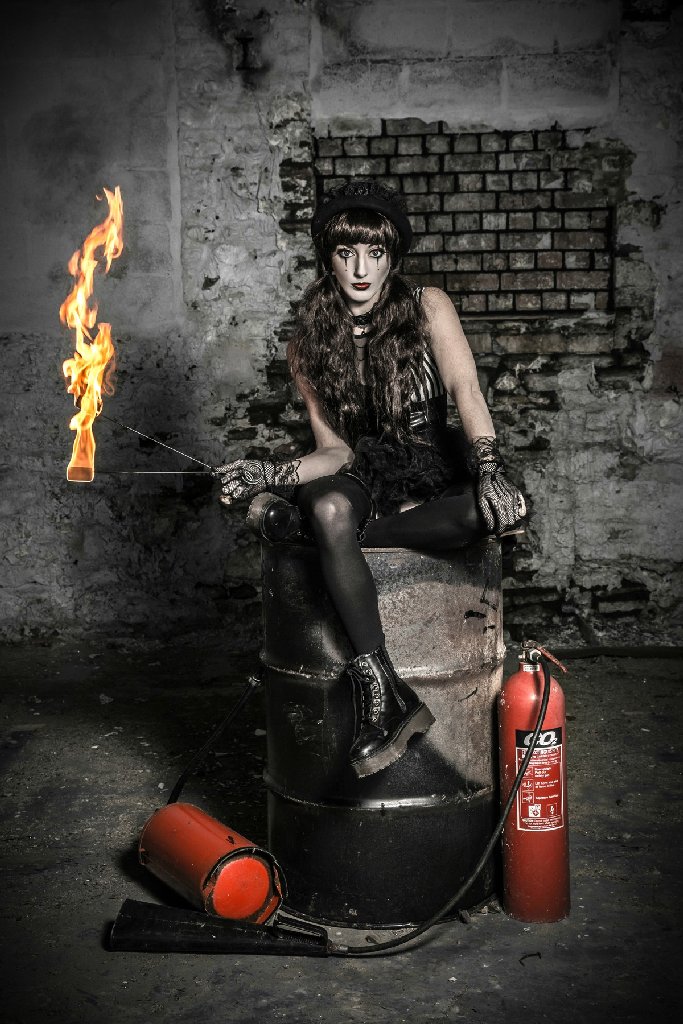 The fire can now be produced in various ways. One way is by the use of a piece of thick cotton string which has been soaked in a solution of nitre and then thoroughly dried.

This string, when once lighted, burns very slowly and a piece one inch long is sufficient for the purpose.

Some performers prefer a small piece of punk, as it requires no preparation.

Still others use tinder made by burning linen rags, as our forefathers used to do. This will not flame, but merely smoulders until the breath blows it into a glow.

The tinder is made by charring linen rags, that is, burning them to a crisp, but stopping the combustion before they are reduced to ashes..............

Barnello once said, "A person wishing to become a Fire-Eater must make up his or her mind to suffer a little at first from burns, as there is no one who works at the business but that gets burns either from carelessness or from accident."

This is verified by the following, which I clip from the London Globe of August 11th, 1880:

Accident to a Fire-Eater. A correspondent telegraphs: A terrible scene was witnessed in the market place, Leighton Buzzard, yesterday. A travelling Negro fire eater was performing on a stand, licking red-hot iron, bending heated pokers with his naked foot, burning tow in his mouth, and the like. At last he filled his mouth with benzolene, saying that he would burn it as he allowed it to escape. He had no sooner applied a lighted match to his lips than the whole mouthful of spirit took fire and before it was consumed the man was burned in a frightful manner, the blazing spirit running all over his face, neck and chest as he dashed from his stand and raced about like a madman among the assembled crowd, tearing his clothing from him and howling in most intense agony. A portion of the spirit was swallowed and the inside of his mouth was also terribly burnt. He was taken into a chemist's shop and oils were administered and applied, but afterwards in agonizing frenzy he escaped in a state almost of nudity from a lodging house and was captured by the police and taken to the work-house infirmary, where he remains in a dreadful condition.

REMEMBER! Always have a large blanket at hand to smother flames in burning clothing—also a bucket of water and a quantity of sand. A siphon of carbonic water is an excellent fire extinguisher.

The gas of gasoline is heavier than air, so a container should never be held ABOVE a flame. Keep kerosene and gasoline containers well corked and at a distance from fire.

Never inhale breath while performing with fire. FLAME DRAWN INTO THE LUNGS IS FATAL TO LIFE.