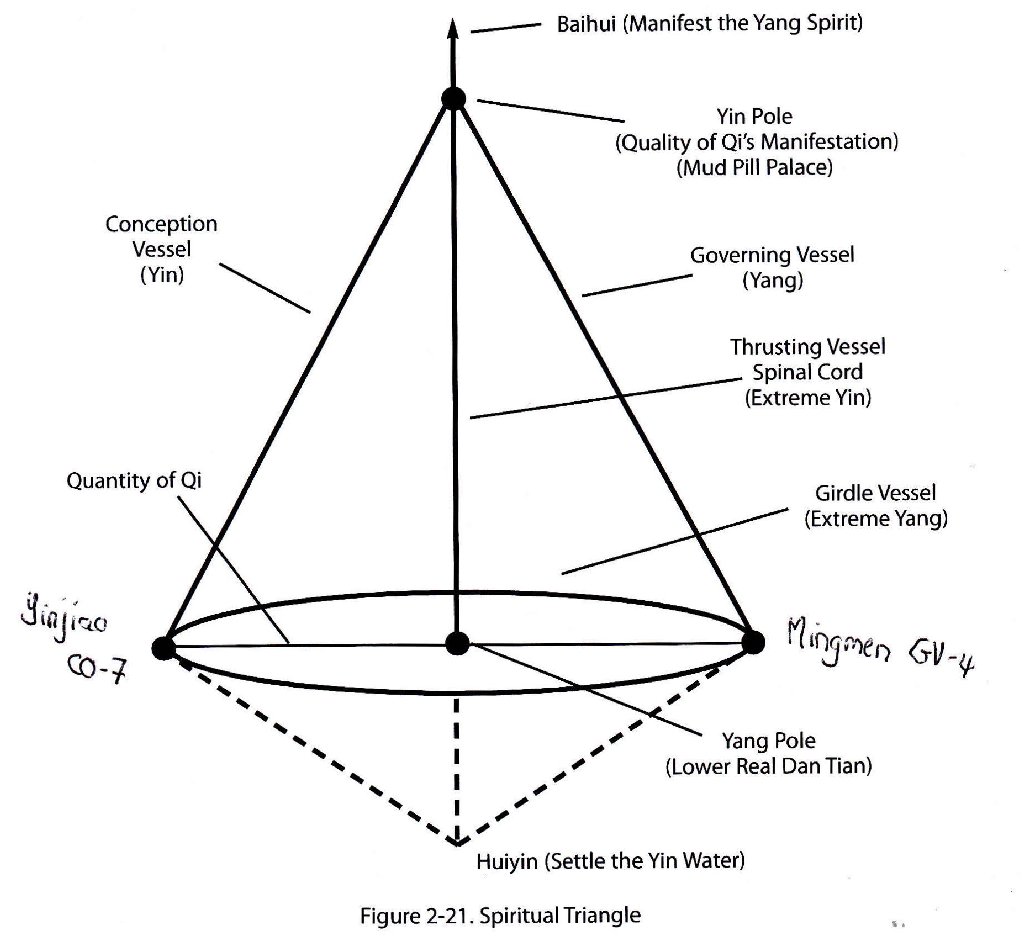 The method is very difficult to explain in words, it is really something you need to see to fully understand and there is a video which Dr Yang, Jwing-Ming has produced which shows you how it is done in full this link takes you to a youtube video explaining what the video is about.

Embryonic breathing combines physical breathing with trigger point stimulation, and is classified within Qigong as a controlled breathing technique.  But it stimulates some rather interesting trigger points.  If we look at the ’tripod’ of meridians which meet with the Girdle vessel – the meridian that goes around the lower waist area below our navel, you will see that there are two key trigger points that act as connecting valves between all the main flows - the Yinjiao (CO-7) and the Mingmen (Gv-4). 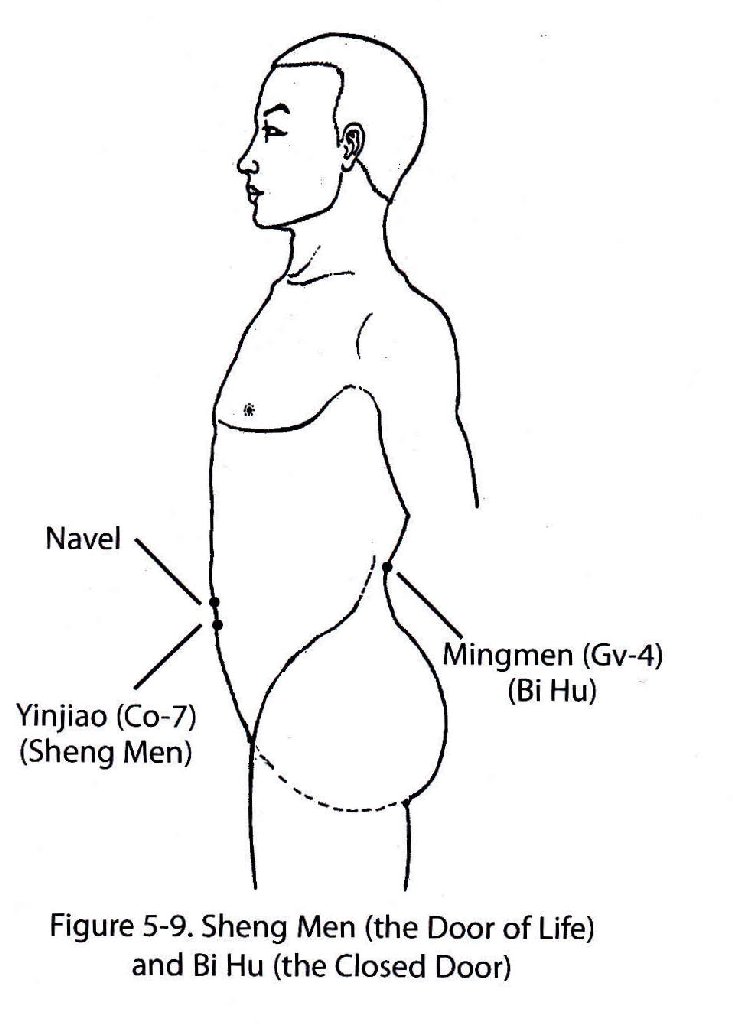 The Lower Real Dan Tien is approximately equivalent in physical terms to the reproductive system and is viewed in spiritual terms as a reservoir of energy which can be used to drive the kundalini experience - the movement of energy up the Thrusting vessel to open the links to the Shen = Higher spirit = Baihui.

The exercise has a two-fold purpose.  In the first place it provides a bit of sexual stimulation to add hormones [principally oxytocin] to the store in our reproductive system - regarded spiritually as adding energy to our Lower Dan Tien.

Perhaps more importantly, however, is that it makes sure all the flows and connections between the various meridians are open and working.  In effect, it ensures there is complete circulation between all  vessels - Conception, Governing, Girdle and Thrusting.  This is key if a controlled safe kundalini experience is to be effected using later exercises.  The Conception and Governing vessels are symbolically identical to Ida and Pingala, the Thrusting vessel is essentially Sushumna. 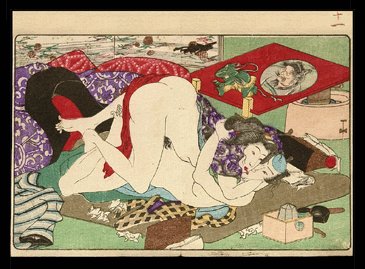 This exercise can be combined with a bit of visualisation which appears to help improve the effectiveness of the exercise.  You can include the Dan Tiens, Shen, and various vessels as you wish.

The exercise involves a sort of  balanced front and back movement with a small amount of rotation.  Some of today's dancing appears to mimic this action and the movement is not dissimilar to that employed by a man when he is making love to a woman, so you are Embryonic breathing in part [the physical breathing bit may not quite be right!] when you are thrusting away.  Woman get much the same effect if they sit astride a man on top to make love. 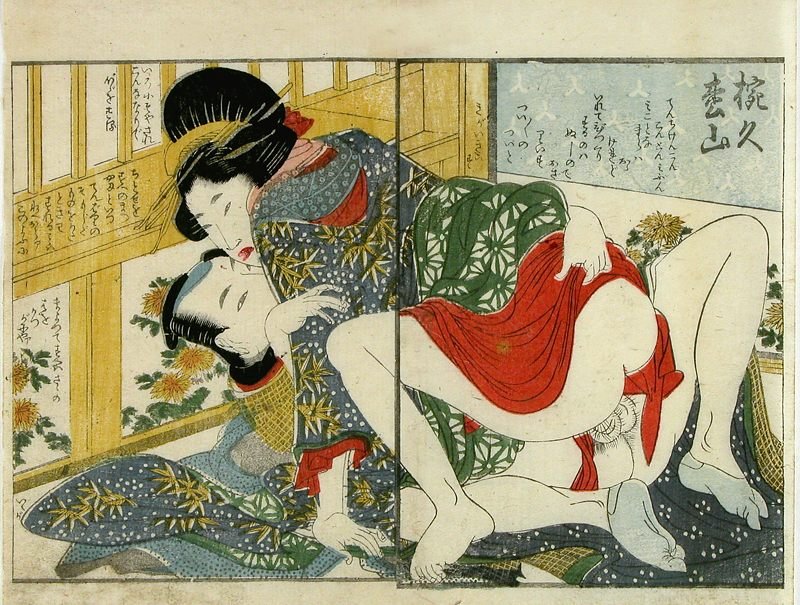 The breathing control is fairly key as it is intended to help with relaxation [as opposed to excitement] which helps the energy balance.  No puffing and panting, the breaths need to be slow and measured - slow deep inhalation, then a short breath hold, then a slow exhalation.

There is an added, more difficult, part to this practise.

In addition to this front back movement to stimulate these two trigger points, you also need to stimulate the perineum and pull in and lock the anus - in effect Huiyin (CO-1).  Either you do it by pulling in your muscles, or someone else does it - a good friend for example [I am joking or maybe I'm not].

The final part in the overall approach is optional as it can be dangerous unless you know what you are doing.  If you press the roof of the mouth with the tongue this key trigger point forms a circuit of energy.  If the perineum is pressed and the roof of the mouth you have created a circuit, meaning the energy can flow unabated round the Governing and Conception vessels.  If you now look at the diagram at the top of this page you can see that pressure of the perineum at the wrong moment could provoke a kundalini experience.

Dr Yang, Jwing-Ming claims that the entire practise brings health benefits as the movements encourage the production of insulin from the Islets of Langerhans in the pancreas, thus helping those with, for example, diabetes.  He also says that physically the exercise can help in regulating testosterone, estrogen and progesterone thus helping those with infertility, problems with periods and other reproductive system problems.  Finally it may help those with metabolic problems by affecting the pituitary and pineal glands.

An alternative name for this technique is Wuji breathing.

In looking on PubMed for papers to back up Dr Yang, Jwing-Ming's hypothesis, it is clear that those running trials on Qigong are not using Qigong, they appear to be confining their studies to a rather weak form of tai chi!  There is reason to believe that Dr Yang, Jwing-Ming may be right in his health assertions - there are plenty of hundred year old qigong practitioners around to show something positive is going on -  but if researchers are not using the right exercises, nothing will ever be proved.