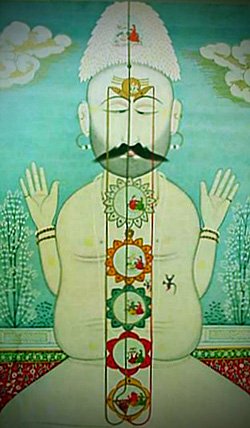 Dharana Darshan is a controlled breathing method which requires deeper breathing, thus a greater supply of oxygen is provided, but the breathing is not rapid, as such it supplies more oxygen but is not hyperventilation.

Superficially it appears to be a method aimed at improving health via the controlled increase of oxygen to oxygen starved cells, and indeed this is one of its benefits.  But its principle mechanism is stimulation via trigger points more specifically via the vagus nerve at the diaphragm.

Although eastern systems rely on a meditation posture requiring you to sit upright cross legged on the floor, this is not obligatory and can for many people be counter-productive because they are uncomfortable.  The key is comfort – the minimising of any nervous sensations and sensations of bodily touch.  You must  sit upright and try to keep your back straight.

Dharana Dharshan incorporates diaphragm control.  Using the diaphragm you inhale, at the same time letting the rib cage expand, meanwhile lifting the shoulders.  Breathing out is just a question of letting go of the air.  Breathing in requires our muscles to contract, whereas breathing out simply requires us to relax the muscles of the diaphragm and the intercostal muscles.  Don’t squeeze the air out, just let go to the normal resting state, shoulders down, rib cage in, diaphragm up.

The next stage is to consciously time your breaths using counting.  Long slow breaths in are what you are aiming for - around about 6 per minute. 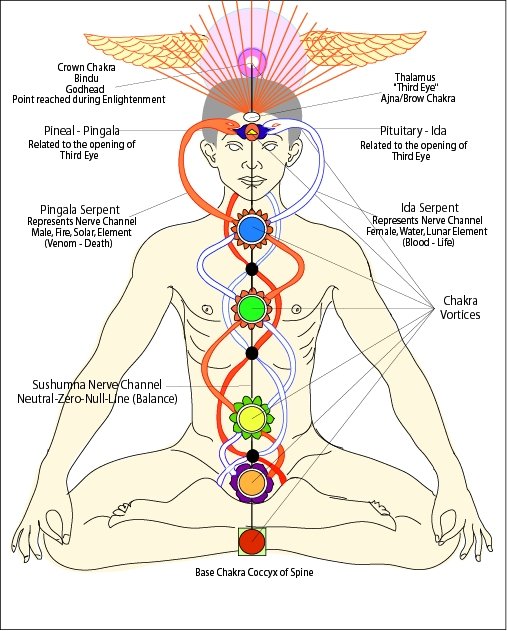 The next stage is to use visualisation techniques.   The objective is to visualise the ‘prana’ circulating in the ‘nadas’ of body.

It is essential that you use the techniques of visualisation used in Indian yoga practise.  By visualising threads of energy, by concentrating on ‘chakra points’ along the spine and by using the routes [spirals, ovals, up and down] movements of the energy that are used in these practises, the breathing is then self-regulated and you don’t have to worry any more about the counting or hyperventilating.

Each imagined circuit of the breath takes a certain length of time – a spiral  takes longer than a straight up and down movement for example, a double helix takes longer than a simple spiral.  As long as you faithfully follow the exercises and imagine every step of the energy flows, you are in effect controlling the breathing in a large number of ways, all of which provide you with different amounts of oxygen.

Although there is reason to link the chakras with the various endocrinal organs – pituitary, pineal, thyroid and so on, so their existence in a sense has some logic to it, there is also every reason to believe that in this context, they were devised solely as an aid to meditation.

Yoga systems say that the chakras have opened and the energy paths have cleared, which is a good enough visualisation in a sense for what is happening and helps people to cope with the effects.

You can incorporate humming or chanting of mantras if you wish.

This can be done once or twice a day, but each session should last no more than about thirty minutes per session.

After about only an hour of controlled breathing all sorts of other odd effects can manifest themselves such as an increase in lactate levels, which may lead to nausea and cramp. You may also get severe headaches.  So never undertake long sessions of this technique.