Iran is the birthplace of a number of complex instruments, as evidenced by the archaeological records found in Western Iran, dating back to the 3rd millennium BC. The Iranian use of both vertical and horizontal angular harps have been documented at the sites Madaktu and Kul-e Farah, with the largest collection of Elamite instruments documented at Kul-e Farah. Multiple depictions of horizontal harps were also sculpted in Assyrian palaces, dating back between 865 and 650 BC.

Xenophon's Cyropaedia refers to a great number of singing women at the court of the Achaemenid Iran. Athenaeus of Naucratis states that, by the time of the last Achaemenid king, Artashata (336–330 BC), Achaemenid singing girls were captured by the Macedonian general, Parmenion. Under the Parthian Empire, a type of epic music was taught to youth, depicting the national epics and myths which were later represented in the Shahnameh of Ferdowsi.

The history of Sassanid music is better documented than the earlier periods, and is especially more evident in the Zoroastrian context. By the time of Khosrow II, the Sassanid royal court was the host of prominent musicians, namely Ramtin, Bamshad, Nakisa, Azad, Sarkash, and Barbad.

A Safavid painting at Hasht Behesht, depicting a banquet 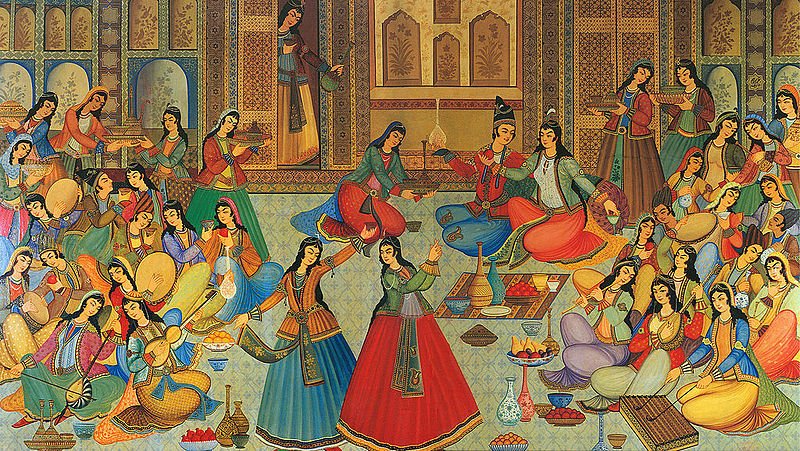