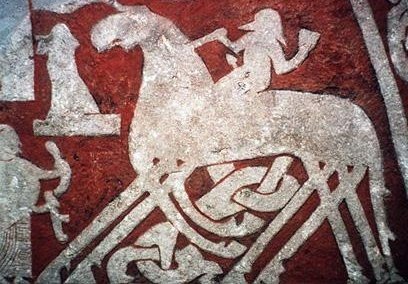 When Óðinn of the Æsir came to the northern lands, and the gods with him, it is truthfully said that they originated and taught those skills that people went on practising long afterwards. Óðinn was superior to them all, and from him they learned all skills, because he knew them all first, and yet more.

But there is this to be said about why he was so very exalted—there were these reasons for it: he was so fair and noble in countenance, when he was sitting among his friends, that it rejoiced the hearts of all. But when he went to battle he appeared ferocious to his enemies. And the reason was that he had the faculty of changing complexion and form in whatever manner he chose. Another was that he spoke so eloquently and smoothly that everyone who heard thought that only what he said was true. Everything he said was in rhyme, like the way, what is now called poetry is composed. He and his temple priests were called craftsmen of poems, for that art originated with them in the Northern lands.

Óðinn could bring it about that in battle his opponents were struck with blindness or deafness or panic, and their weapons would cut no better than sticks, while his men went without mail and were as wild as dogs or wolves, biting their shields, being as strong as bears or bulls. They killed the people, but neither fire nor iron took effect on them. That is called berserk fury.