W.Y. Evans-Wentz - The Fairy-Faith in Celtic Countries - The Magic Wand 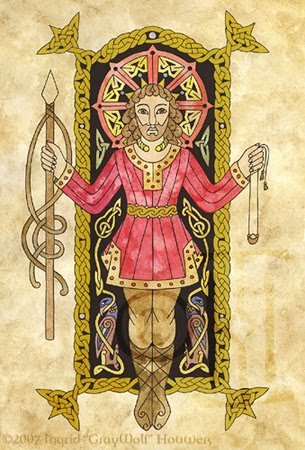 In modern fairy-lore this divine branch or wand is the magic wand of fairies; or where messengers like old men guide mortals to an underworld it is a staff or cane with which they strike the rock hiding the secret entrance.

The Irish Druids made their wands of divination from the yew-tree; and, like the ancient priests of Egypt, Greece, and Rome, are believed to have controlled spirits, fairies, daemons, elementals, and ghosts while making such divinations.

It will help us to understand how closely the ancient symbols have affected our own life and age--though we have forgotten their relation with the Otherworld--by offering a few examples, beginning with the ancient Irish bards who were associated with the Druids.

A wand in the form of a symbolic branch, like a little spike or crescent with gently tinkling bells upon it, was borne by them; and in the piece called Mesca Ulad or 'Inebriety of the Ultonians' it is said of the chief bard of Ulster, Sencha, that in the midst of a bloody fray he 'waved the peaceful branch of Sencha, and all the men of Ulster were silent, quiet.