The Gates of Golgonooza

Golgonooza is a City of Imagination built by Los, a spiritual vision of London and also linked to Jerusalem and is Blake's great city of art and science. ... Golgonooza is walled against Satan and his wars. 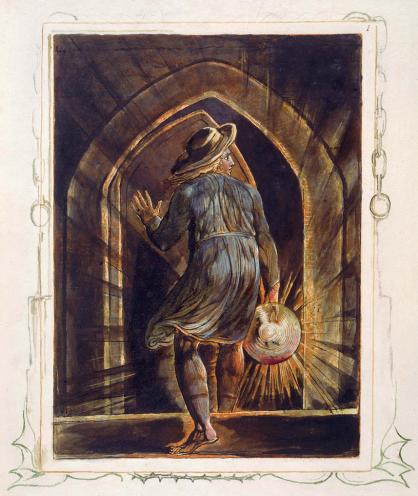 And the North Gate of Golgonooza toward generation
Has four sculptured bulls terrible before the gate of iron
And iron, the bulls; and that which looks toward Ulro
Clay baked and enamelled, eternal glowing as four furnaces
Turning upon the wheels of Albion’s sons with enormous power
And that toward Beulah four gold silver brass and iron
And that toward Eden four formed of gold silver brass and iron

The South, a golden gate, has four lions terrible, living
That toward generation four of iron carved wondrous
That toward Ulro four clay baked laborious workmanship
That toward Eden four immortal gold silver  brass and iron

The Western gate fourfold is closed, having four Cherubim
Its guards, living, the work of elemental hands, laborious task
Like men, hermaphroditic, each winged with eight wings
That toward generation, iron; that toward Beulah stone;
That toward Ulro clay; that toward Eden, metal.
But all closed up till the last day, when the graves shall yield their dead