The Story of Burnt Njal - Of Portents 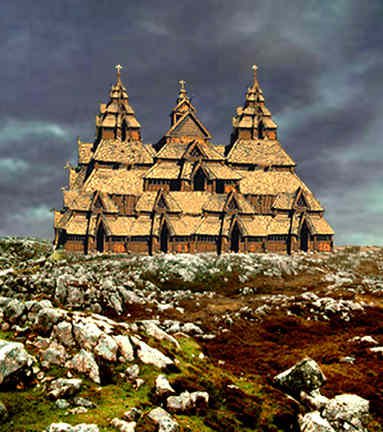 At Reykium on Skeid dwelt one Runolf Thorstein's son. His son's name was Hildiglum. He went out on the night of the Lord's day, when nine weeks were still to winter; he heard a great crash, so that he thought both heaven and earth shook. Then he looked into the west "airt," and he thought he saw thereabouts a ring of fiery hue, and within the ring a man on a gray horse. He passed quickly by him, and rode hard. He had a flaming firebrand in his hand, and he rode so close to him that he could see him plainly. He was as black as pitch, and he sung this song with a mighty voice—

Then he thought he hurled the firebrand east towards the fells before him, and such a blaze of fire leapt up to meet it that he could not see the fells for the blaze. It seemed as though that man rode east among the flames and vanished there.

After that he went to his bed, and was senseless a long time, but at last he came to himself. He bore in mind all that had happened, and told his father, but he bade him tell it to Hjallti Skeggi's son. So he went and told Hjallti, but he said he had seen "'the Wolfs ride,' and that comes ever before great tidings".