The Line of the Heart - Palmistry for all - Cheiro 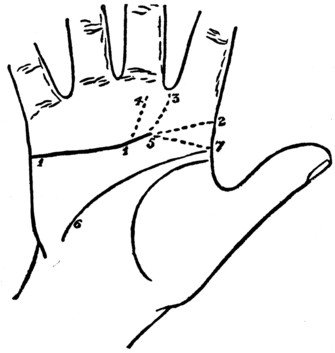 THE LINE OF HEART AS INDICATING THE AFFECTIONATE AND EMOTIONAL NATURE

The Line of Heart relates purely to the affectionate disposition, in fact, to the mental side of the love nature of the subject. It should be borne in mind that, by lying as it does on that part of the hand above the Line of Head, it is consequently on the portion of the hand that relates to mental characteristics and not to the physical.

From the outside of the Mount of Jupiter, it denotes the blind enthusiast in affection, a man or woman who places his or her ideal of love so high that neither fault nor failing is seen in the being worshipped. With these people their pride in the object of their affection is beyond all reason, and all such extremists as a rule suffer terribly through their affections...................

From the centre of the Mount of Jupiter, the Heart Line gives more moderation, but also great ideality, and is one of the best of the variations of this Line that we are about to consider.

People with such a Heart Line are firm and reliable in their affections, they have an unusually high code[Pg 69] of honour and morality. They are ambitious that the person they live with be great, noble, and successful. They seldom marry beneath their station in life, and they have fewer love affairs than any other class.

If they once really love, they love for ever. They do not believe in second marriages, and the divorce courts are seldom troubled with their presence.

The Heart Line rising from between the first and second fingers, gives a calmer but a very deep nature in all matters of the affections (3, Plate XVI.).

These people seem to strike the happy medium between the ideality and pride given by Jupiter, and the more selfish love nature given when the line rises from Saturn.

They are not very demonstrative when in love, but they are capable of the very greatest sacrifices for those they care for. They do not expect the person on whom they bestow their affection to be a god or a goddess.

When the Line of Heart rises on the Mount of Saturn the subject will be rather selfish in all questions of affection (4, Plate XVI.). These people are not self-sacrificing, like the previous type. They are inclined to be cynical, reserved, undemonstrative but very insistent in trying to gain the person they want. They will let nothing stand in their way, but once they have obtained their object they show little tenderness or devotion.

They are very unforgiving if they discover any lapses on the part of their partner, but as they are "a law unto themselves," they close their eyes to their own shortcomings.

The Line of Heart that rises from under the base of the Mount of Saturn (5, Plate XVI.), exhibits all[Pg 70] the foregoing characteristics, but in a much more intensified form. Such persons live for themselves, and care little whether those around them are happy or not.

The shorter the Line of Heart is on the Hand, the less the higher sentiments of the affection make themselves manifest.