Bryn Celli Ddu is a prehistoric site on the Welsh island of Anglesey located near Llanddaniel Fab. Its name means 'the mound in the dark grove'. It was archaeologically excavated between 1928 and 1929.

It is the centrepiece of a major Neolithic Scheduled Monument in the care of Cadw (the Welsh government’s historic environment service). The presence of a mysterious pillar within the burial chamber, the reproduction of the 'Pattern Stone', carved with sinuous serpentine designs, and the fact that the site was once a henge with a stone circle, have all attracted much interest.

Until recently, not much archaeological attention has been paid to Bryn Celli Ddu’s wider surroundings. This is something that is being rectified by a team from the University of Wales in collaboration with Cadw, Manchester Metropolitan University and the University of Central Lancashire.

One new study is the re-examination of the known rock art, which saw the decorated outcrop next to Bryn Celli Ddu excavated for the first time.  The excavation suggested that the outcrop could be as much as three times larger than previously thought, so the known cupmarks may represent just the tip of the iceberg – though as the site is so disturbed by later quarrying, one can only speculate as to whether the ancient artwork might have originally been more extensive.

On rising ground within sight of Bryn Celli Ddu, and with views of prominent landmarks such as the Snowdonia mountain range, four new unrecorded rock art outcrops were also discovered, rather indicating that this is a very large and important site.

The cups themselves numbered in their dozens – the largest concentration, on ‘Outcrop 1’, was made up of at least 40 – and while at first glance the marks appeared to be scattered randomly, on closer inspection clusters forming ‘rosette’ patterns could be seen, while others seemed to follow the lines of natural fissures in the rock. Still more formed ‘dumbbell’ motifs, where two cups are linked by a shallow groove. 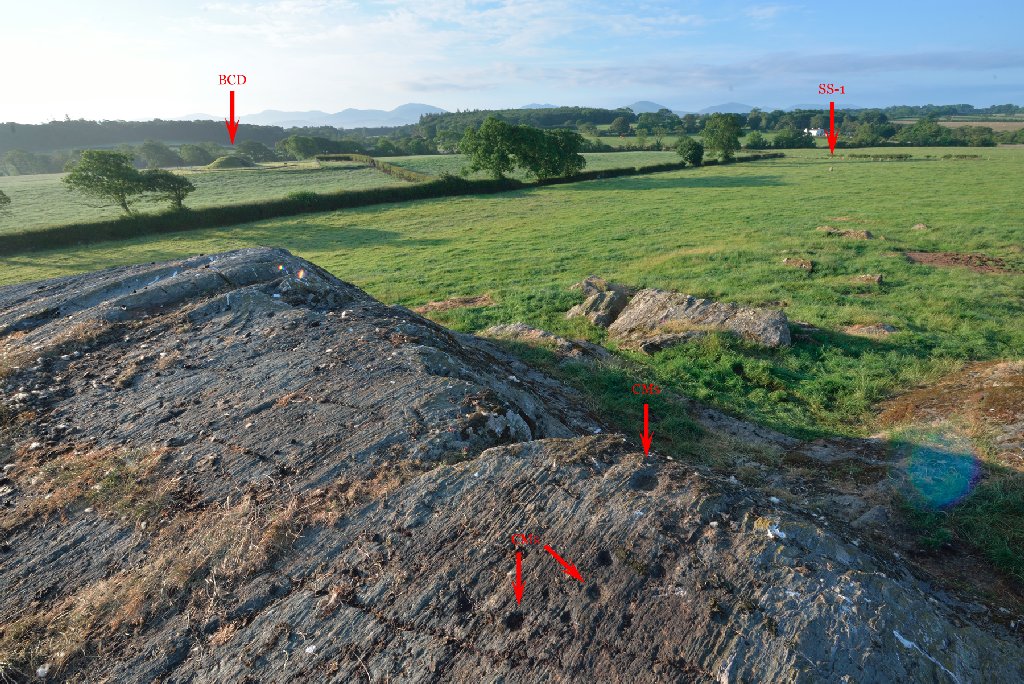 Crack and crevice
Cup and rings
Cup or bowl
Hourglass