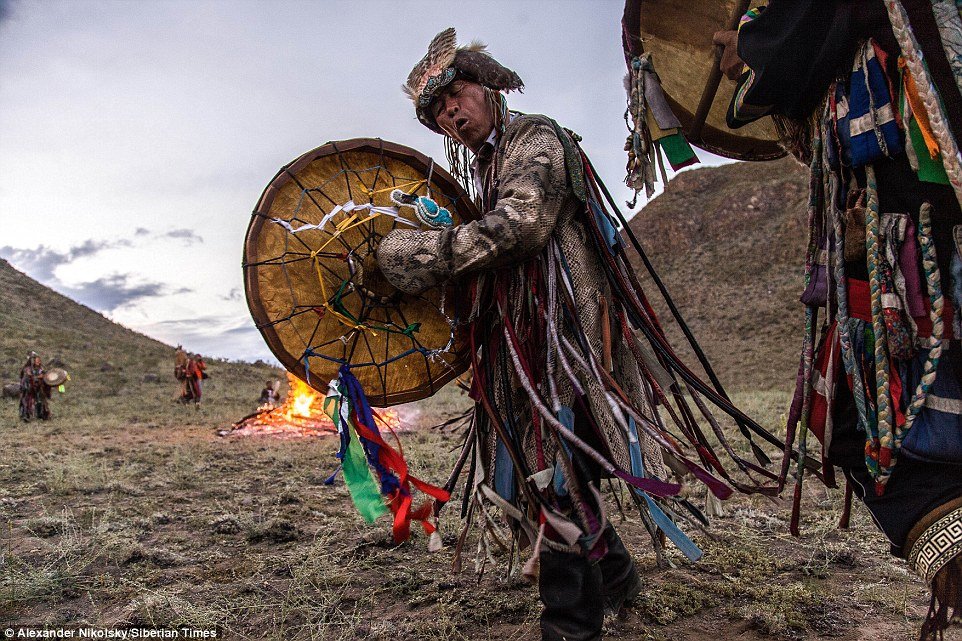 The rite of the Yakutian shaman (as the author witnessed during his field research) began in front of a lighted stove when in-doors or in front of a fire when outdoors. First, the shaman called the fire spirits and conversed with them.

Wearing ritual dress, to which were attached bells, mirrors, images of spirits cut out of copper plate, and several clusters of other metal objects, the shaman held a drum in his left hand and pounded it with a drumstick held in his right hand; all the while praying facing the fire.

As the drumming grew faster, the shaman would suddenly, as if he had lost control, twist his body back and forth, and left and right, while jumping around the fire. Then he resumed his prayer in a. changed voice, which grew faster and faster. His antics and changed voice would be the shaman's imitation of the spirits' movements and speech. In this light, his mental condition would be the state of trance-possession in which the shaman changes into such spirits.

This rite mainly consists of such communication with the spirits.

The shaman Afanasyev claimed that, ever since he became a shaman, whenever he needed them and wherever he might be, he could call upon the spirits with whom he had communicated during his initiation process, and they would come to his side.

This is a point we have to keep in mind.

From the time of his initiation process, the people in his neighborhood called Afanasyev "deranged." He truly could not sleep nor eat, such was the severity of his loss of consciousness during a trance. During this state he experienced changing into a wild duck, an eagle or a wolf.

We should not, however, regard these imitative actions as being caused by a mental disorder, but rather we should interpret them as a religious condition. The initiation ceremony of a shaman does not turn him into a mental patient. We must regard it as an important, turning point, endowing him with the ability of trans-possession.

The teacher-shaman, supervising the initiation ceremony, induces the state of changed consciousness as a religious experience.