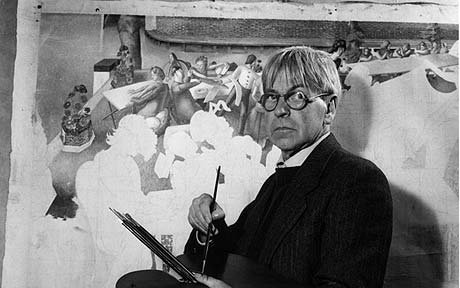 Only after Hilda's death in 1950 did Stanley modify his approach to painting. …..
One result of Stanley's change of approach is that it is no longer as practical as before to deduce a 'reading' for these post-1950 visionary paintings. They are better understood if seen as a series of Stanley mini-resurrections, purging him from the traumas of his now Hilda-less life and empowering him to continue on his metaphysical way. In such masterpieces, his settings - the Thames riverfront in Christ Preaching at Cookham Regatta,  Cookham Moor in Love on the Moor,  Hampstead Heath in The Apotheosis of Hilda - re-create proto-Paradises with their figures in rapture, now redeemed to a Last Day state of perfection.

Stanley became convinced that the down-to-earth aspects of our sexual instinct, when metamorphosed in their up-in-heaven aspects, become the basis of the creative universalities of existence. His ecstatic figures in his 1950s paintings are honouring this insight, as in Christ Preaching at Cookham Regatta : in Love on the Moor they are empowering Sex=Love as our escape from the limitations of our prison-wall tapping : and in The Apotheosis of Hilda they are rejoicing in its gift as the source of unity in the bipolarity of existence……………….

In the great dialectic of Life between Eros (the life-force, energy, creativity, hope) and Thanatos (the death-force, decay, destruction, despair) Stanley trumpeted Eros, even to the very hour of his passing. He was its advocate, its disciple, a true son, like Christ, of his God.

I keep trying to get with [my notions] to where some all comprehending notion will great-grandpa the lot. These notions seem ....to be parts of one thing. What is the one thing? I concluded that God was the grand-daddy of them all....

Christ Preaching at Cookham Regatta, intended for the Church-House.  The painting was never finished

detail of Love on the Moor 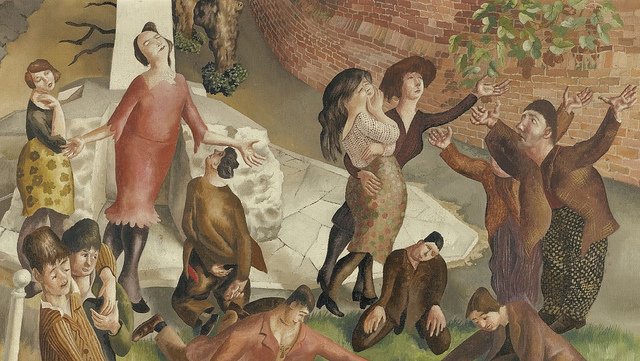