In 1907, Sibelius underwent a serious operation for suspected throat cancer. The impact of this brush with death has been said to have been profound and inspired works that he composed in the following years. 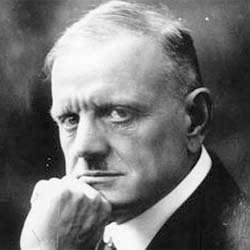 The Symphony No. 4 in A minor, Op. 63, is one of seven completed symphonies composed by Jean Sibelius. Written between 1910 and 1911, it was premiered in Helsinki on 3 April 1911 by the Philharmonia Society, with Sibelius conducting.

For this work Sibelius reversed the traditional classical positions of the second and third movements, placing the slow movement as the third. He also begins the piece with a slow movement instead of the traditional fast opening movement . A typical performance lasts between 35–40 minutes. It is scored for an orchestra including 2 flutes, 2 oboes, 2 clarinets (in Bb and A), 2 bassoons, 4 horns (in F and E), 2 trumpets (in F and E), 3 trombones, timpani, glockenspiel or/and tubular bells, and strings.