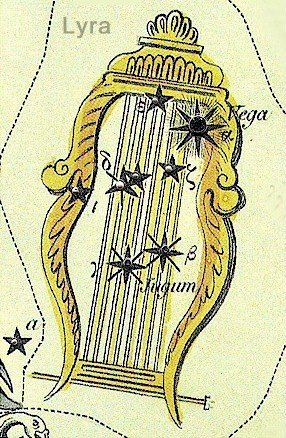 yra (from Greek λύρα) is a small constellation. It is one of 48 listed by the 2nd century astronomer Ptolemy, and is one of the 88 constellations recognized by the International Astronomical Union. Lyra was often represented on star maps as a vulture or an eagle carrying a lyre, and hence is sometimes referred to as Vultur Cadens or Aquila Cadens, respectively. Beginning at the north, Lyra is bordered by Draco, Hercules, Vulpecula, and Cygnus. Lyra is visible from the northern hemisphere from spring through autumn, and nearly overhead, in temperate latitudes, during the summer months. From the southern hemisphere, it is visible low in the northern sky during the winter months.

Vega, Lyra's brightest star, is one of the brightest stars in the night sky, and forms a corner of the famed Summer Triangle asterism.

Beta Lyrae is the prototype of a class of stars known as Beta Lyrae variables.

These binary stars are so close to each other that they become egg-shaped and material flows from one to the other.