Lurs symbolically would have been the same as the twin horns and may even have been worn – like wings, as well as played – ‘little boy blue come blow us your horn, the sheep are in the meadow the cows are all gone’.

One wonders whether their use has been misinterpreted and that the fact they can be played hides some of their real purpose.  The discs on the end may have enabled them to be fastened to a priestess more easily.

When played, the resonance and noise may have helped in spiritual ceremonies, and the breathing khapalbati style may also have helped.  Bells have their own symbolism.

Lurpack butter gets its name from Lurs. 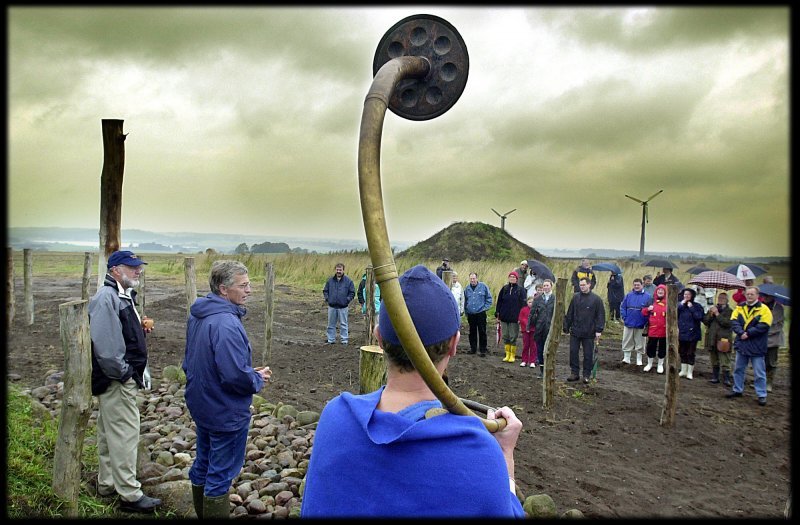 Almost exclusive to the Scandinavian Bronze Age are the enigmatic instruments known as lurs – S shaped tubes of cast bronze with mouthpieces and decorated bells that projected and amplified the sound.  Something of the order of 60 lurs have been found so far, usually by peat cutters working in areas that were shallow lakes or bogs during the Bronze age.  Deposited in such places are yet more offerings to the gods, many of those recovered are in such good condition they can still be used today.  They are played like any modern brass instrument – by buzzing the lips into or against the mouthpiece……….

In their earliest form the lurs were shaped like the horns of oxen.  Over time they became increasingly elaborate.  The decorated and ornamented discs on the ends of them perform no practical function.