"Bonnie Prince Charlie (1720-1788) was defeated by the English at Culloden on 16 April 1746 and many of his supporters were imprisoned. The subject of this picture is the release of one of these Jacobite rebels from prison. Millais appears to have invented the incident, but may also have been inspired by the novels of Sir Walter Scott, which provided a wealth of material for artists and illustrators in the second half of the 19th Century. The rebel's wife, supporting their small child and comforting her exhausted, wounded husband, hands an order of release to the gaoler.

The expression on her face is inscrutable. She appears strangely detached from the action.  The picture's original title was The Ransom and early sketches reveal that Millais originally showed a purse being handed over. However, in the finished work he substitutes the order of release which gives the painting its current title. ........

Millais used a professional model called Westall for the father and his future wife, Effie Ruskin (with her hair darkened) for the woman.

Millais sold the picture to the lawyer Joseph Arden for £400. When it was exhibited at the Royal Academy in 1853 it proved so popular that a policeman had to be installed in front of the picture to move the spectators on. The Illustrated London News reported that Millais had attracted 'a larger crowd of admirers in his little corner…than all the Academicians put together' (7 May 1853).

And maybe the gaoler looks like John Ruskin and the released captive looks like John Everett Millais.  Interesting to speculate just how much Everett had to pay Ruskin to get Effie.......... 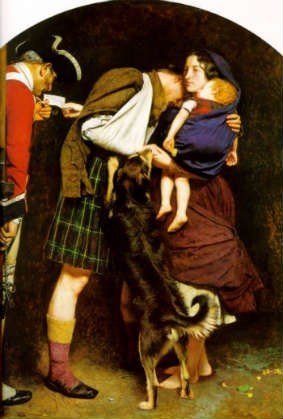