Geoffrey Studdert Kennedy grew up in Leeds and studied at Trinity College, Dublin. He was ordained in
the Church of England and in 1915 volunteered as an army chaplain. Based at the front, he helped
with the wounded, acting as a stretcher-bearer and medical aide. He comforted the dying and buried the dead, often where they had fallen. He gained the nickname 'Woodbine Willie' for his habit of handing out cigarettes to cheer up the men, saying a chaplain needed 'a box of fags in your haversack,
and a great deal of love in your heart'.
Gregarious, funny and unconventional, he was a popular preacher at a time when many men had abandoned their faith ('I know what you're thinking, here comes the bloody parson'). He was awarded the Military Cross for a particular act of bravery on the battlefield, which he himself described:
'There was no morphine.That was the horror. Someone must go for it. I went. I went because the hell outside was less awful than the hell in. I didn't go to do an heroic deed or perform a Christian service; I went because I couldnt bear the moaning any longer.'
His populist poetry is reminiscent of Kipling's ballads and seeks to give voice to the ordinary men he served. Later he was a chaplain to the king, and a missionary to working class communities. 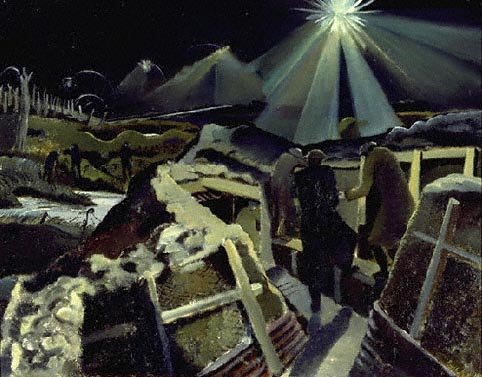 There's a broken, battered viilage
Somewhere up behind the line,
There's a dug-out and a bunk there,
That I used to say were mine.

I remember how I reached them,
Dripping wet and all forlorn,
In the dim and dreary twilight
Of a weeping summer morn.

All that week I'd buried brothers,
In one bitter battle slain,
In one grave I laid two hundred.
God! What sorrow and what rain!

And that night I'd been in trenches,
Seeking out the sodden dead,
And just dropping them in shell-holes,
With a service swiftly said.

For the bullets rattled round me,
But I couldn't leave them there,
Water-soaked in flooded shell-holes,
Reft of common Christian prayer.

So I crawled round on my belly,
And I listened to the roar
Of the guns that hammered Thiepval,
Like big breakers on the shore.

Then there spoke a dripping sergeant,
When the time was growing late.
"Would you please to bury this one.
'Cause 'e used to be my mate?"

So we groped our way in darkness
To a body lying there,
Just a blacker lump of blackness,
With a red blotch on his hair.

Though we turned him gently over.
Yet I still can hear the thud,
As the body fell face forward,
And then settled in the mud.

We went down upon our faces,
And I said the service through,
From "I am the Resurrection,"
To the last, the great "adieu."

We stood up to give the Blessing,
And commend him to the Lord,
When a sudden light shot soaring
Silver swift and like a sword.

At a stroke it slew the darkness,
Flashed its glory on the mud,
And I saw the sergeant staring
At a crimson clot of blood.

There are many kinds of sorrow
In this world of Love and Hate,
But there is no sterner sorrow
Than a soldier's for his mate.