There seemed to be evidence that the systems of all living creatures is found at the vibrational level below the physical level - the so called underworld.

Although I could not find conclusive proof,  there was quite a bit of evidence that this is the location of the systems that animate.  This therefore is Nature.  When we talk about Nature doing this or Nature doing that, these are the systems we are talking about and this is where they are to be found.  The term sometimes used to describe this active system is Natura naturans.  Natura naturans is a Latin term coined during the Middle Ages, mainly used by Baruch Spinoza meaning "Nature naturing", or more loosely, "nature doing what nature does".

Although it does not  follow that rock art found in a cave depicting animals, thereby implies that the systems of animals are found in the underworld, there is more evidence that the shamans of old went 'underground' in their shamanic flights and there met the spirits of animals.  In effect, during the trance state brought on by dancing drumming and drugs, the shamans went to 'lower levels of consciousness' and it was at these lower levels of consciousness that they met animal spirits.

Where the animals depicted in the rock art were animals with human heads, then these were means of transport.

The cave was just a convenient place to record the encounters.  In the rock art in which these encounters are recorded, the spirits encountered tend to be those of the animals around at the time. 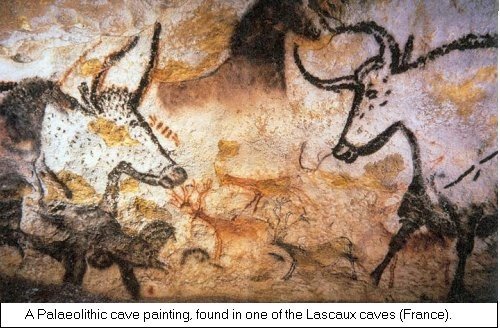 The species represented by the statuettes include 4 felines; 4 mammoths; 3 anthropomorphs; 2 bison, 1 bear and 1 horse.  The faunal remains found in the same rock shelters as the statuettes come from a much wider range of species – 21 in all; the image makers focused on a limited bestiary.  Although the small number of pieces makes generalisations hazardous, Hahn concluded

‘As in wall art, animal species represented in mobiliary art do not simply mimic the relative proportions of animal species in the faunal assemblages from the sites'......

The meaningful spectra of some species did not extend from portable art to the nether world; they are therefore not depicted in cave art.