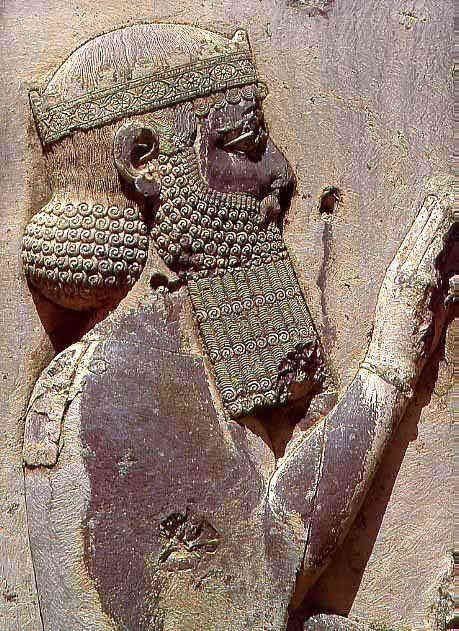 Darius I (c. 550–486 BCE) was the third king of the Persian Achaemenid Empire. Also called Darius the Great, he ruled the empire at its peak, when it included much of West Asia, the Caucasus, parts of the Balkans (Thrace-Macedonia and Paeonia), most of the Black Sea coastal regions, parts of the North Caucasus, Central Asia, as far as the Indus Valley in the far east, and portions of north and northeast Africa including Egypt (Mudrâya), eastern Libya and coastal Sudan.

Darius organized the empire by dividing it into provinces and placing satraps to govern it. He organized a new uniform monetary system, along with making Aramaic the official language of the empire. He also put the empire in better standing by building roads and introducing standard weights and measure. Through these changes the empire was centralized and unified. Darius also worked on construction projects throughout the empire, focusing on Susa, Pasargadae, Persepolis, Babylon and Egypt. He had the cliff-face Behistun Inscription carved to record his conquests, an important testimony of the Old Persian language.

Darius is mentioned in the Biblical books of Haggai, Zechariah, Daniel, and Ezra–Nehemiah.

All this is political, but in some of the images of Darius we see him with symbolic objects and one of those is a lion.  The general literal translation of this is that Darius killed lions, but the carving is stylised and not a hunting scene.

The modern Tarot cards for Strength generally shows a woman – the feminine – subduing a lion – the masculine conscious will and ego.  But older Tarot cards show a man doing this.  Both are valid of course, but the older card is of great interest because it matches with the image for darius.

What the card is telling us is that Darius – presumably to obtain wisdom and inspiration – was able to subdue the lion in himself – aggression and the ferocious ego of the masculine.  The Conscious was able to obtain a spiritual experience by squashing its own ego! 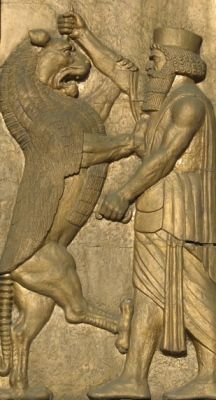