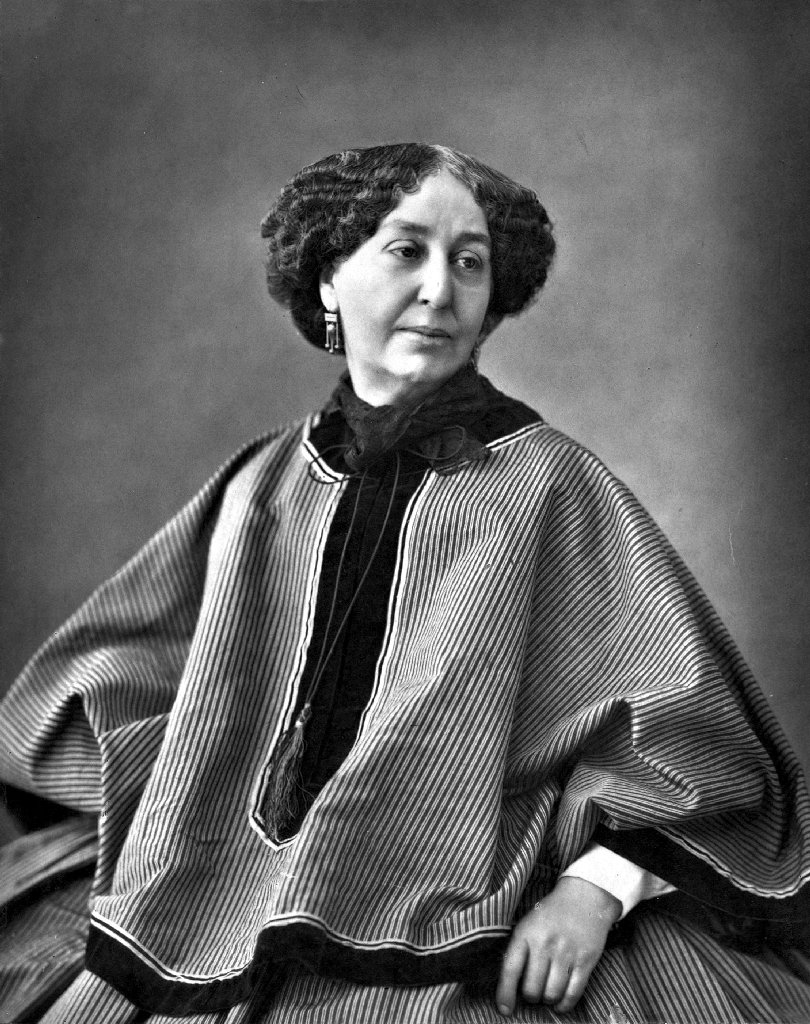 In 1836, at a party hosted by Marie d'Agoult, Chopin met the French author George Sand (born [Amantine] Aurore [Lucile] Dupin). Short (under five feet, or 152 cm), dark, big-eyed and a cigar smoker, she initially repelled Chopin, who remarked, "What an unattractive person la Sand is. Is she really a woman?"

Sand, in contrast, in a letter to Grzymała of June 1838, admitted strong feelings for the composer and debated whether to abandon a current affair in order to begin a relationship with Chopin; she asked Grzymała to assess Chopin's relationship with Maria Wodzińska, without realising that the affair, at least from Maria's side, was over.

In June 1837 Chopin visited London where he played at a musical soirée.  On his return to Paris, his association with Sand began in earnest, and by the end of June 1838 they had become lovers. Sand, who was six years older than the composer, and who had had a series of lovers, wrote at this time:

"I must say I was confused and amazed at the effect this little creature had on me ... I have still not recovered from my astonishment, and if I were a proud person I should be feeling humiliated at having been carried away ..."

The two spent a miserable winter on Majorca (8 November 1838 to 13 February 1839), where, together with Sand's two children, they had journeyed in the hope of improving the health of Chopin and that of Sand's 15-year-old son Maurice, and also to escape the threats of Sand's former lover Félicien Mallefille.[68] After discovering that the couple were not married, the deeply traditional Catholic people of Majorca became inhospitable,  making accommodation difficult to find. This compelled the group to take lodgings in a former Carthusian monastery in Valldemossa, which gave little shelter from the cold winter weather.

On 3 December, Chopin complained about his bad health and the incompetence of the doctors in Majorca: "Three doctors have visited me ... The first said I was dead; the second said I was dying; and the third said I was about to die."

He also had problems having his Pleyel piano sent to him. It finally arrived from Paris in December. Chopin wrote to Pleyel in January 1839: "I am sending you my Preludes [(Op. 28)]. I finished them on your little piano, which arrived in the best possible condition in spite of the sea, the bad weather and the Palma customs."

The Prelude Op. 28, No. 15, by Frédéric Chopin, known as the "Raindrop" prelude, is one of the 24 Chopin preludes. The prelude is noted for its repeating A-flat, which appears throughout the piece and sounds like raindrops to many listeners. [It is more like the tolling of a bell - not rain.  Although rain as spiritual input it may be.  More like a premonition of things to come. ]

Some, though not all, of Opus 28 was written during Chopin and George Sand's stay at a monastery in Valldemossa, Majorca in 1838. In her Histoire de ma vie, Sand related how one evening she and her son Maurice, returning from Palma in a terrible rainstorm, found a distraught Chopin who exclaimed, "Ah! I knew well that you were dead." While playing his piano he had a dream:

He saw himself drowned in a lake. Heavy drops of icy water fell in a regular rhythm on his breast, and when I made him listen to the sound of the drops of water indeed falling in rhythm on the roof, he denied having heard it. He was even angry that I should interpret this in terms of imitative sounds. He protested with all his might – and he was right to – against the childishness of such aural imitations. His genius was filled with the mysterious sounds of nature, but transformed into sublime equivalents in musical thought, and not through slavish imitation of the actual external sounds.

Sand did not say which prelude Chopin played for her on that occasion, but most music critics assume it to be no. 15, because of the repeating A flat, with its suggestion of the "gentle patter" of rain.

However, Peter Dayan points out that Sand accepted Chopin's protests that the prelude was not an imitation of the sound of raindrops, but a translation of nature's harmonies within Chopin's "génie".

Frederick Niecks says that the prelude "rises before one's mind the cloistered court of the monastery of Valldemossa, and a procession of monks chanting lugubrious prayers, and carrying in the dark hours of night their departed brother to his last resting-place."