Here is a description of Balzac in the early thirties by Lamartine:

Balzac was standing before the fireplace of that dear room where I have seen so many remarkable men and women come and go. He was not tall, though the light on his face and the mobility of his figure prevented me from noticing his stature. His body swayed with his thought; there seemed at times to be a space between him and the floor; occasionally he stooped as though to gather an idea at his feet, and then he rose on them to follow the flight of his thought above him. At the moment of my entrance he was carried away by the subject of a conversation then going on with Monsieur and Madame de Girardin, and only interrupted himself for a moment to give me a keen, rapid, gracious look of extreme kindness. 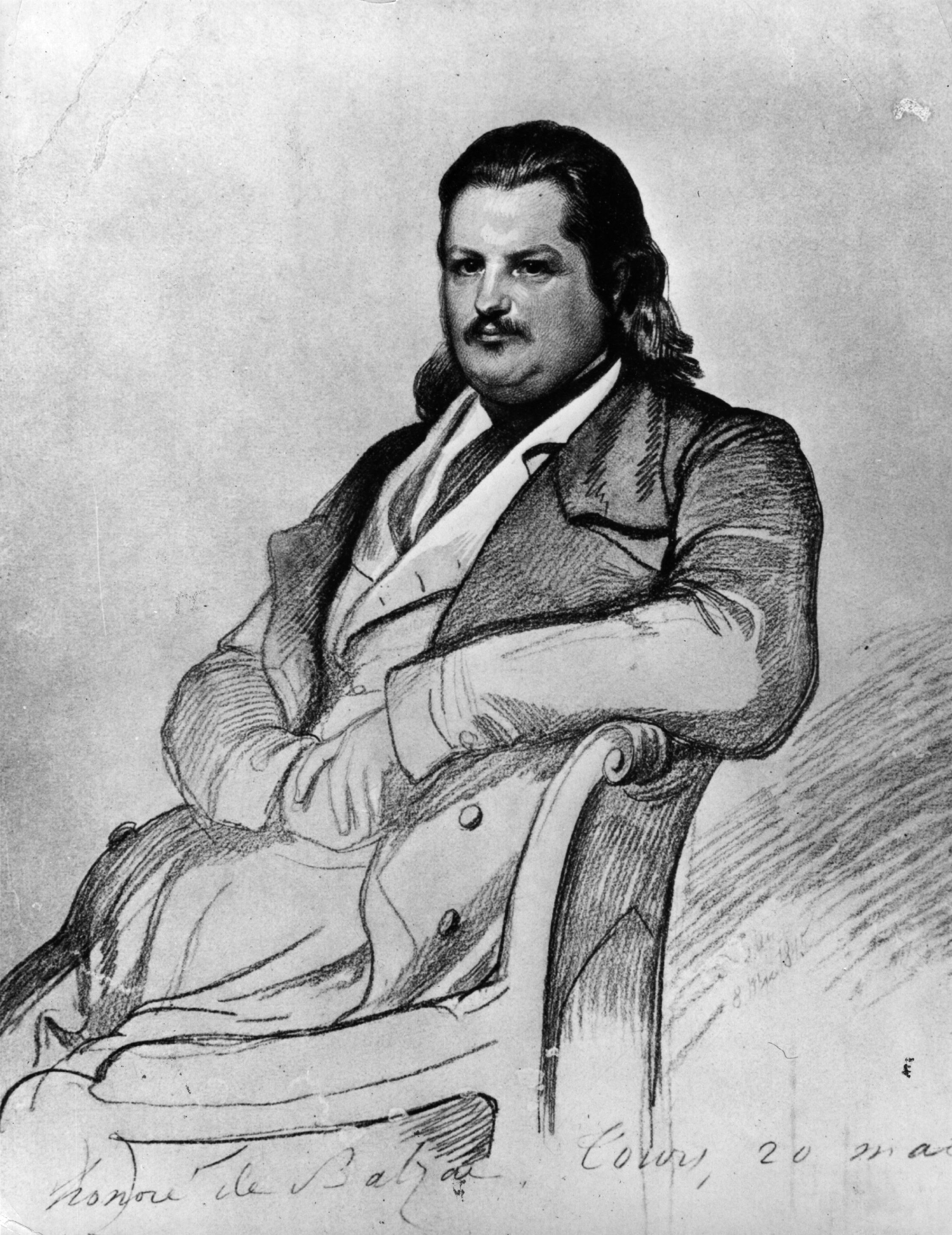 He was stout, solid, square at the base and across the shoulders. The neck, chest, body and thighs were powerful, with something of Mirabeau's amplitude, but without heaviness. His soul was apparent, and seemed to carry everything lightly, gaily, like a supple covering, not in the least like a burden. His size seemed to give him power, not to deprive him of it. His short arms gesticulated easily; he talked as an orator speaks. His voice resounded with the somewhat vehement energy of his lungs, but it had neither roughness nor sarcasm nor anger in it; his legs, on which he rather swayed himself, bore the torso easily; his hands, which were large and plump, expressed his thought as he waved them. Such was the outward man in that robust frame. But in presence of the face it was difficult to think of the structure. That speaking face, from which it was not easy to remove one's eye, charmed and fascinated you; his hair was worn in thick masses; his black eyes pierced you like darts dipped in kindliness; they entered confidingly into yours like friends. His cheeks were full and ruddy; the nose well modeled, though rather long; the lips finely outlined, but full and raised at the corners; the teeth irregular and notched. His head was apt to lean to one side, and then, when the talk excited him, it was lifted quickly with an heroic sort of pride.

But the dominant expression of his face, greater than even that of intellect, was the manifestation of goodness and kindheartedness. He won your mind when he spoke, but he won your heart when he was silent. No feeling of envy or hatred could have been expressed by that face; it was impossible that it should seem otherwise than kind. But the kindness was not that of indifference; it was loving kindness, conscious of its meaning and conscious of others; it inspired gratitude and frankness, and defied all those who knew him not to love him. A childlike merriment was in his aspect; here was a soul at play; he had dropped his pen to be happy among friends, and it was impossible not to be joyous where he was .

Some day you will find out that there is far more happiness in another's happiness than in your own.
Balzac, Honore de and A. J. Krailsheimer (Translator). Pere Goriot. 1835.

However gross a man may be, the minute he expresses a strong and genuine affection, some inner secretion alters his features, animates his gestures, and colors his voice. The stupidest man will often, under the stress of passion, achieve heights of eloquence, in thought if not in language, and seem to move in some luminous sphere. …. Are not our finer feelings the poems of the human will?
Balzac, Honore de and A. J. Krailsheimer (Translator). Pere Goriot. 1835.

Is there any instinct more deeply implanted in the heart of man than the pride of protection, a protection which is constantly exerted for a fragile and defenceless creature?
Balzac, Honore de and A. J. Krailsheimer (Translator). Pere Goriot. 1835.

Love may be or it may not, but where it is, it ought to reveal itself in its immensity.
Balzac, Honore de and George Saintsbury (Translator). The Human Comedy. 1845.