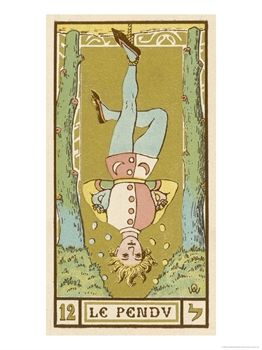 Card 12 touches upon a completely different sphere, which is that of Passive or Mystic Initiation, known also as  feminine or ionian. From now on the personality gives up the exaltation of its natural energies, far from behaving as if at the centre of autonomous action, it is effaced in order to undergo in a docile fashion, outside influences.

The Mystic, …., is convinced that he is nothing but an empty shell, powerless in itself. His passive renunciation puts him at the service of whatever acts upon him. He hands himself over with a foot and arms bound. ….. In arcana 12 the slim blond man of arcana 1 reappears; but what a contrast between the Magician, ..and the tortured man, free only in his right leg which he bends behind the left to form a cross above the upturned triangle outlined by his arms and head. The whole representation thus reminds me of the alchemic sign of the Accomplishment of the Great Work…..

…. The Hanged Man is inactive and powerless where his body is concerned, for his soul is freed in order to envelop the physical organism in a subtle atmosphere in which the purest spiritual rays are refracted.  .He does not tread the earth on which mortals find their support, for properly speaking, he is not an earthly being, for material reality escapes him; he lives in the dream of his ideality, supported by a mysterious gallows made of two trees stripped of their branches, joined by a piece of dead wood. This crossbeam is yellow, to indicate that its substance is condensed light, or otherwise though fixed or worked out to a system.

This is the doctrine which the Hanged Man has made his own, to which he adheres to the point of being hanged from it with his whole person. It concerns a very high religious conception, too sublime for the mass of mortals to attain, an ideal, moreover, too high to be realized in the practical sense. It is the religion of the elite souls, a tradition superior to the teaching of Churches and of confessions which accommodate themselves to human weakness.

The Hanged Man is bound, not as an instinctive or blind believer, but as a wise man who has discerned the vanity of individual ambitions and has understood the wealth of the heroic sacrifice which aspires towards total oblivion of self. Concerning common mysticism this neglect of self is extended even to the exclusion of all care for individual salvation, for pure devotion discounts any benefit in the form of reward.

Moreover, it is not the conquest of heaven that the Hanged Man aspires to, his head being turned towards the Earth. It is saying that his preoccupations are earthly and he is devoted to the good of others, to the redemption of poor humans, the victims of their own ignorance and selfish passions.

The two trees between which the Hanged Man swings correspond to the columns of Jachin and Boaz which stand to the right and left of every Initiated person. They depict the sun of emotional aspirations which tend to shield man from crude materialism. Their blue bark turning gradually to green indicates from the start a serene contemplation, faithful devotion to religious practices, then a progressive vitalization aiming at freeing the moral and truly living side of religion…………The warm sap which has made the two trees grow gives a purple colour to the scars left by the branches that have been cut off.

…. There is nothing narrow about the Hanged Man's religion; it goes beyond ….., such as results from pure religious feeling.

Of the buttons on the tunic two are red and four white. This detail is not insignificant, for two refers to the Priestess, thus to the active faith in the mystic, whereas four indicates the Emperor, the master of will-power, which must be pure and disinterested in feminine or Ionian initiation, since the Initiated gives up will-power through himself and above all for himself: he only wants what is willed by the mysterious power which he serves.

Where the Magus claims to command, the Mystic aspires only to obey.

This confident abandon is revealed by his serene, carefree appearance, hence the calm and smiling face of the Hanged Man, a strange sufferer, whose bound arms are holding a bag from which fall gold and silver coins. These are the spiritual treasures accumulated by the Initiate who has enriched himself intellectually. Holding to nothing, he scatters liberally the gold of the just ideas which he has been able to formulate and the gold of precious knowledge which he has striven to acquire (Gold, Spirit, Reason). He is no less liberal with his affection, with his kind feelings and his good will, symbolized by the silver coins scattered on his left (Silver, Soul, Sensitivity).