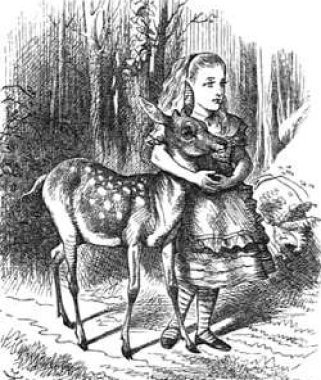 Lewis Carroll – Through the Looking Glass

She very soon came to an open field, with a wood on the other side of it: it looked much darker than the last wood, and Alice felt a little timid about going into it. However, on second thoughts, she made up her mind to go on: `for I certainly won't go back,' she thought to herself, and this was the only way to the Eighth Square.

`This must be the wood, she said thoughtfully to herself, `where things have no names. I wonder what'll become of my name when I go in? I shouldn't like to lose it at all -- because they'd have to give me another, and it would be almost certain to be an ugly one. But then the fun would be, trying to find the creature that had got my old name! That's just like the advertisements, you know, when people lose dogs -- "answers to the name of `Dash:' had on a brass collar" -- just fancy calling everything you met "Alice," till one of them answered! Only they wouldn't answer at all, if they were wise.'

She was rambling on in this way when she reached the wood: it looked very cool and shady. 'Well, at any rate it's a great comfort,' she said as she stepped under the trees, 'after being so hot, to get into the--into WHAT?' she went on, rather surprised at not being able to think of the word. 'I mean to get under the--under the--under THIS, you know!' putting her hand on the trunk of the tree. 'What DOES it call itself, I wonder? I do believe it's got no name--why, to be sure it hasn't!'

She stood silent for a minute, thinking: then she suddenly began again. 'Then it really HAS happened, after all! And now, who am I? I WILL remember, if I can! I'm determined to do it!' But being determined didn't help much, and all she could say, after a great deal of puzzling, was, 'L, I KNOW it begins with L!'

Just then a Fawn came wandering by: it looked at Alice with its large gentle eyes, but didn't seem at all frightened. 'Here then! Here then!' Alice said, as she held out her hand and tried to stroke it; but it only started back a little, and then stood looking at her again.

'What do you call yourself?' the Fawn said at last. Such a soft sweet voice it had!

'I wish I knew!' thought poor Alice. She answered, rather sadly, 'Nothing, just now.'

Alice thought, but nothing came of it. 'Please, would you tell me what YOU call yourself?' she said timidly. 'I think that might help a little.'

'I'll tell you, if you'll move a little further on,' the Fawn said. 'I can't remember here.'

So they walked on together through the wood, Alice with her arms clasped lovingly round the soft neck of the Fawn, till they came out into an open field and here the fawn gave a sudden bound into the air, and shook itself free from Alice’s arm.

A sudden look of alarm came into its beautiful brown eyes, and in another moment it had

darted away at full speed.

Alice stood looking after it, almost ready to cry with vexation at having lost her dear little fellow-traveller so suddenly. 'However, I know my name now.' she said, 'that's SOME comfort. Alice--Alice--I won't forget it again. And now, which of these finger-posts ought I to follow, I wonder?'

It was not a very difficult question to answer, as there was only one road through the wood, and the two finger-posts both pointed along it. 'I'll settle it,' Alice said to herself, 'when the road divides and they point different ways.'

But this did not seem likely to happen. She went on and on, a long way, but wherever the road divided there were sure to be two finger-posts pointing the same way, one marked 'TO TWEEDLEDUM'S HOUSE' and the other 'TO THE HOUSE OF TWEEDLEDEE.'

'I do believe,' said Alice at last, 'that they live in the same house! I wonder I never thought of that before--But I can't stay there long. I'll just call and say "how d'you do?" and ask them the way out of the wood. If I could only get to the Eighth Square before it gets dark!' So she wandered on, talking to herself as she went, till, on turning a sharp corner, she came upon two fat little men, so suddenly that she could not help starting back, but in another moment she recovered herself, feeling sure who they must be.