The Story of Burnt Njal - Gunnar 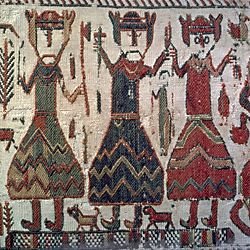 Now we must go back and say that Gunnar rides east over Thurso water, but when he had gone a little way from the river he grew very drowsy, and bade them lie down and rest there.

They did so. He fell fast asleep, and struggled much as he slumbered.

Then Kolskegg said, "Gunnar dreams now". But Hjort said, "I would like to wake him".

"That shall not be," said Kolskegg, "but he shall dream his dream out".

Gunnar lay a very long while, and threw off his shield from him, and he grew very warm. Kolskegg said, "What hast thou dreamt, kinsman?"

"That have I dreamt," says Gunnar, "which if I had dreamt it there I would never have ridden with so few men from Tongue."

"Tell us thy dream," says Kolskegg.

Then Gunnar sang a song.

Chief, that chargest foes in fight!
Now I fear that I have ridden
Short of men from Tongue, this harvest;
Raven's fast I sure shall break.
Lord, that scatters Ocean's fire!
This at least, I long to say,
Kite with wolf shall fight for marrow,
Ill I dreamt with wandering thought.

"I dreamt, methought, that I was riding on by Knafahills, and there I thought I saw many wolves, and they all made at me; but I turned away from them straight towards Rangriver, and then methought they pressed hard on me on all sides, but I kept them at bay, and shot all those that were foremost, till they came so close to me that I could not use my bow against them. Then I took my sword, and I smote with it with one hand, but thrust at them with my bill with the other. Shield myself then I did not, and methought then I knew not what shielded me. Then I slew many wolves, and thou, too, Kolskegg; but Hjort methought they pulled down, and tore open his breast, and one methought had his heart in his maw; but I grew so wroth that I hewed that wolf asunder just below the brisket, and after that methought the wolves turned and fled. Now my counsel is, brother Hjort, that thou ridest back west to Tongue."

"I will not do that," says Hjort; "though I know my death is sure, I will stand by thee still."

Then they rode and came east by Knafahills, and Kolskegg said—

"Seest thou, kinsman! many spears stand up by the hills, and men with weapons."

"It does not take me unawares," says Gunnar, "that my dream comes true."

"What is best to be done now?" says Kolskegg; "I guess thou wilt not run away from them."

"They shall not have that to jeer about," says Gunnar, "but we will ride on down to the ness by Rangriver; there is some vantage ground there."

Now they rode on to the ness, and made them ready there, and as they rode on past them Kol called out and said—

"Whither art thou running to now, Gunnar?"

But Kolskegg said, "Say the same thing farther on when this day has come to an end".