All the fives from whatever suit are cards of adversity. These cards indicate conflict, loss, and other negative experiences in your life that must be overcome.

In Aleister Crowley’s Tarot pack for example, the cards and their meanings are worry, disappointment, defeat and strife, different sorts of adversity that can be helped if you face them and recognise the problem.  In terms of the spiritual path, these act like further tests, but they can be a good deal more severe than the tests used to judge whether one is suited to the path ahead. We have called this purification on the diagram as one has to prove oneself whiter than white during this stage and REALLY relearn.

The guiding active force during this stage is the Hierophant, backed by the High Priestess, Magician and Hermit.  In quite a number of cards, the card is called 'The Pope' indicating a person who is the head of a religious institution, not just an ordinary priest or cleric.  Thus this person has authority.

Wirth’s card is called the Pope.  Although the twin columns leading to an understanding of the realm beyond can just be seen, he blocks the way, preventing access. All understanding must come through him and his interpretation. In Wirth's card, he is given a benign appearance, implying that he protects the great unwashed from themselves.

"….it is the lot of the Pope to reply to the agonizing questions which believers put to him. When he dogmatizes he strengthens beliefs and he formulates religious teaching which is addressed to two categories of the faithful. These are represented by the two characters kneeling before the pontifical chair.  One is stretching out his arm and raising his head as if to say: 'I have understood'; the other is leaning his forehead on his joined hands and accepts the dogma humbly, convinced of his own inadequacy in spiritual matters.............The Pope’s mission is to make known intelligible reality which hides behind the mask of the illusion of the senses............" 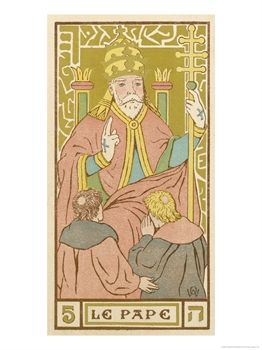 Four seasons and the hours
Hierophant