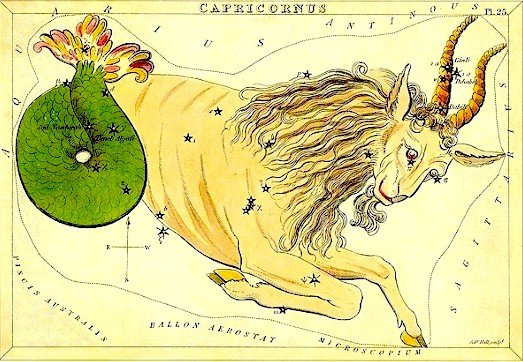 Capricornus is one of the constellations of the modern zodiac. Its name is Latin for "horned goat" or "goat horn" or "having horns like a goat's", and it is commonly represented in the form of a sea-goat: a mythical creature that is half goat, half fish. Its symbol is

Capricornus is one of the 88 modern constellations, and was also one of the 48 constellations listed by the 2nd century astronomer Ptolemy. Under its modern boundaries it is bordered by Aquila, Sagittarius, Microscopium, Piscis Austrinus, and Aquarius. The constellation is located in an area of sky called the Sea or the Water, consisting of many water-related constellations such as Aquarius, Pisces and Eridanus. It is the smallest constellation in the zodiac.

Capricornus is a faint constellation, with only one star above magnitude 3; its alpha star has a magnitude of only 3.6.

The brightest star in Capricornus is δ Capricorni, also called Deneb Algedi, with a magnitude of 2.9, 39 light-years from Earth. Like several other stars such as Denebola and Deneb, it is named for the Arabic word for "tail" (deneb); its traditional name means "the tail of the goat". Deneb Algedi is a Beta Lyrae variable star (a type of eclipsing binary). It ranges by about 0.2 magnitudes with a period of 24.5 hours.[3]