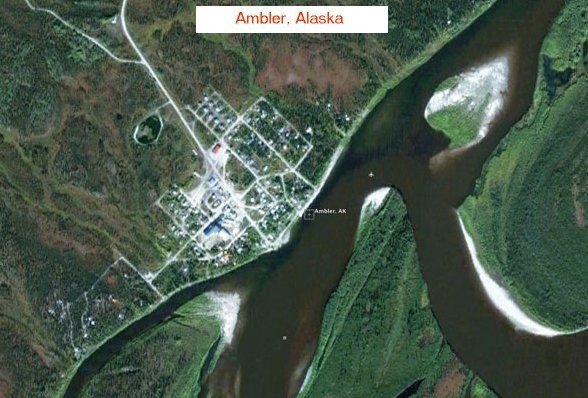 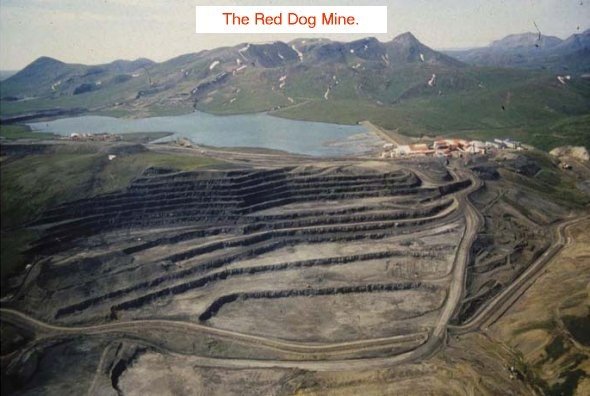 Note that there is now a mine - the Red Dog mine near Ambler which has deposits of lead and zinc.

Although Maniilaq's reputation was spreading, many people still ridiculed him. Others kept their distance, and with good reason: his actions as well as his words marked him as a madman. Not only did he bathe regularly and sleep on willow branches; everywhere he went he carried a long pole which he would raise when he made camp. At regular intervals (some claim every seventh day) he would tie something  - elders disagree what it was - to his pole as a signal for people to gather.

On these days he would refuse to travel or hunt; instead, he'd beat his skin drum, sing, and make his predictions to anyone who would listen.

The iivaqsaat (literally, those who travel around bends in waterways) were coming. These pale-skinned strangers, Maniilaq said, would ride out of the east, traveling in swift boats and fire-powered chairs in the sky.

They'd bring many wonders to The People: thin birch bark on which to write, a way to contain fire inside houses, and the ability to speak across great distances.

A large city would grow at the mouth of the Ambler River, where the iivaqsaa would seek something of great value in the earth.

Mark Cleveland insists that one day the village will become a city stretching all the way to the Jade Mountains, eight miles away.

And, Maniilaq said, "Light will come in the form of the word"- one of many obvious references to Christianity, which arrived with Friends Church missionaries just before the turn of the century. He spoke, too, of a "grandfather" whose glorious Power would soon be seen. Hearing of Maniilaq, the missionaries were quick to adopt him (posthumously, of course), as a prophet of God-a move that no doubt hastened their acceptance, even as it confirmed Maniilaq's stature.

As I read through the accounts of the dead, as I look into Mark Cleveland's earnest face, I want to share the belief that I find there. But I can't help insisting, deep down, on a logical explanation for Maniilaq and his visions. He certainly was a man of intelligence and courage, and I don't begrudge him a certain prescience-one born of rational thought. Defying the shamans and their taboos wasn't magic, I tell myself, just a triumph of common sense. It's likely he'd heard of white men and their God through travellers from the south. The Russians were trading on the Yukon River a century before Maniilaq was born, and Otto von Kotzebue, a Russian naval officer who explored the northwest arctic coast in 1816, saw iron knives among the Inupiat, showing that contact already existed with the outside world.

Yet I can't explain how a nineteenth-century Eskimo envisioned outboard motors, aircraft, and telephones decades before their invention, or how he saw Ambler a century before its founding.

When I offer elders my logical version, they only shake their heads. How can a naluaqmiu understand?