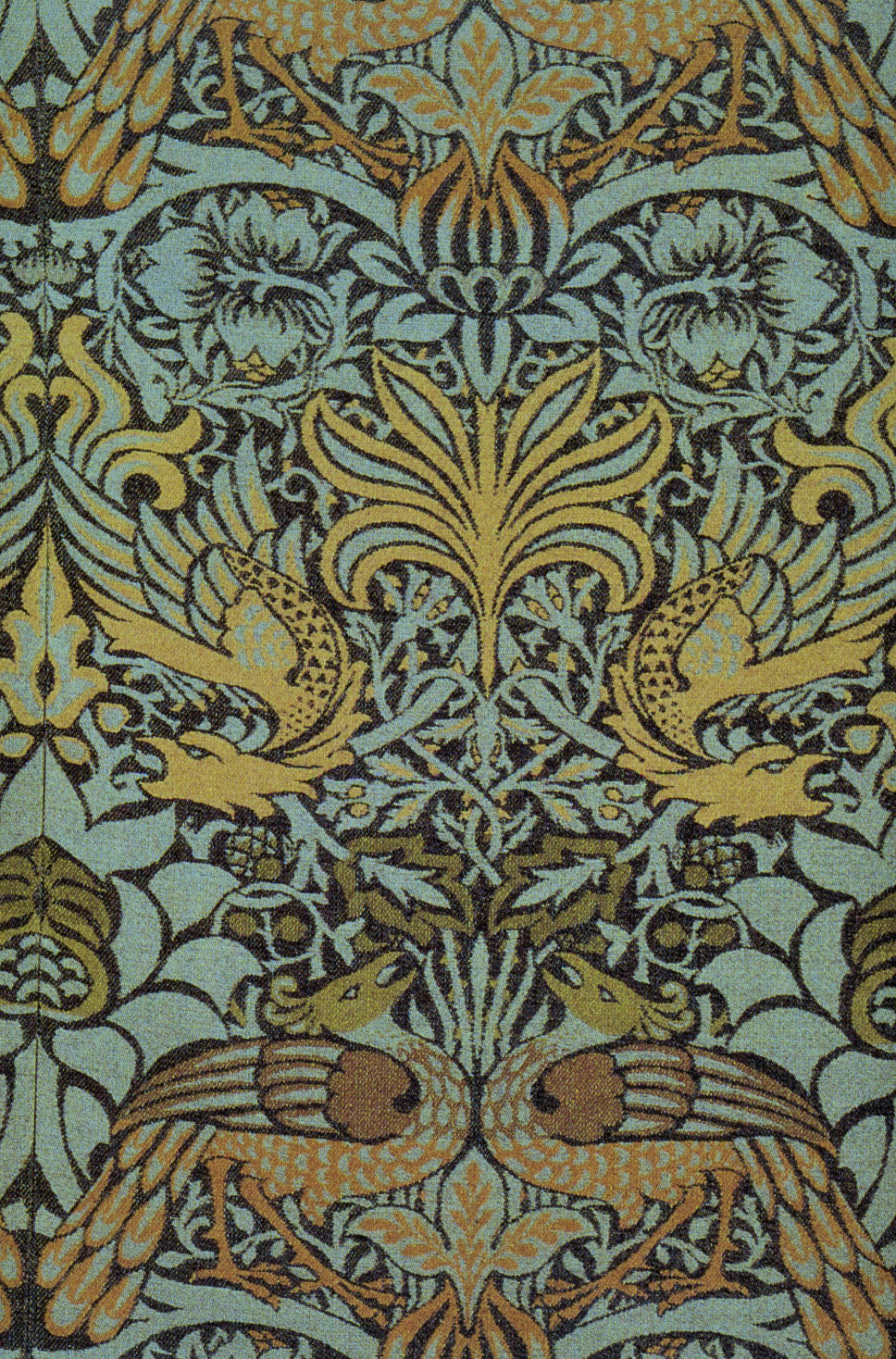 On the morrow awakeneth Gudrun; and she speaketh with Sigurd and saith
"For what cause is Brynhild heavy, and as one who abideth but death ?"

6810
And thoughtful of weighty matters, and things that are most of worth."

"It was other than this," said Gudrun, "that I deemed her yesterday;
All men would have said great trouble on the wife of Gunnar lay."

"Is it so?" saith Sigurd the Volsung, "Ah, I sore misdoubt me then,
That thereof shall we hear great tidings that shall be for the ruin of men.

6815
"Why grieveth she so," said Gudrun, "a queen so mighty and wise,
The Chooser of the war-host, the desire of many eyes,
The Queen of the glorious Gunnar, the wife of the man she chose ?
And she sits by his side on the high-seat, as the lily blooms by the rose."

"Where then in the world was Brynhild,"said he, "when she spake that word,

6820
And said that her beloved was her very earthly lord ?"

Then was Sigurd silent a little, and Gudrun spake no more ;
For despite the heart of the Niblungs, and her love exceeding sore
With fear her soul was smitten for the word that Sigurd spake,
And yet more for his following silence; and the stark death seemed to awake

6825
And stride through the Niblung dwelling, and the sunny morn grew dim :
Till, lo, the voice of the Volsung, and the speech came forth from him.

"Hearken, Gudrun my wife ; the season is nigh at hand,
Yea, the day is now on the threshold, when thou alone in the land
Shalt answer for Sigurd departed, and shalt say that I loved thee well ;

6830
And yet if thou hear'st men say it, then true is the tale to tell
That Brynhild was my beloved in the tide and the season of youth ;
And as great as is thy true-love, e'en so was her love and her truth.
But for this cause thus have I spoken, that the tale of the night hast thou told,
And cast the word unto Brynhild, and shown her the token of gold.

6835
— A deed for the slaying of many, and the ending of my life,
Since I betrayed her unwitting. — Yet grieve not, Gudrun my wife !
For cloudy of late were the heavens with many a woven lie,
And now is the clear of the twilight, when the slumber draweth anigh.
But call up the soul of the Niblungs, and harden thine heart to bear,

6840
For wert thou not sprung from the mighty, today were thy portion of fear :
Yea, thou wottest it even as I ; but I see thine heart arise,
And the soul of the mighty Niblungs, and fair is the love in thine eyes"

Then forth went the King from the chamber to the council of the Kings
And he sat with the wise in the Doom-ring for the sifting of troublous things,

6845
And rejoiced the heart of the people : and the Wrath kept watch by his side.
And his eyen were nothing dimmer than on many a joyous tide.

But abed lay Brynhild the Queen, as a woman dead she lay,
And no word for better or worse to the best of her folk would she say :
So they bore the tidings to Gunnar, and said : "Queen Brynhild ails

6850
With a sickness whereof none knoweth, and death o'er her life prevails."

Then uprose Gunnar the Niblung, and he went to Brynhild his wife,
And prayed her to strengthen her heart for the glory of his life :
But she gave not a word in answer, nor turned to where he stood,
And there rose up a fear in his heart, and he looked for little of good :

6855
There he bode for a long while silent, and the thought within him stirred
Of wise speech of his mother Grimhiid, and many a warning word :
But he spake :
"Art thou smitten of God, unto whom shall we cast the prayer?
Art thou wronged by one of the King-folk, for whom shall the blades be bare? "

Belike she never heard him ; she lay in her misery,

6860
And the slow tears gushed from her eyen and nought of the world would she see.
But ill thoughts arose in Gunnar, and remembrance of the speech
Erst spoken low by Grirmhild ; yet he turned his heart to beseech,
And he spake again :
"O Brynhild, if I ever made thee glad,
If the glory of the great-ones of my gift thine heart hath had,

6865
As mine heart hath been faithful to thee, as I longed for thy life-days' gain,
Tell now of thy toil and thy trouble that we each of each may be fain ! "

Nought spake she, nothing she moved, and the tears were dried on her cheek;
But the very words of Grimhild did Gunnar's memory seek ;
He sought and he found and considered ; and mighty he was and young.

6870
And he thought of the deeds of his fathers and the tales of the Niblungs sung;
How they bore no God's constraining, and rode through the wrong and the right
That the storm of their wrath might quicken, and their tempest carry the light.
The words of his mother he gathered and the wrath-flood over him rolled,
And with it came many a longing, that his heart had never told.

6875
Nay, scarce to himself in the night-tide, for the gain of the ruddy rings.
And the fame of the earth unquestioned and the mastery over kings.
And he sole King in the world-throne, unequalled, unconstrained ;
And with wordless wrath he fretted at the bonds that his glory had chained
And the bitter anger stirred him, and at last he spake and cried :

6880
"How long, O all-wise Brynhild, like the dead wilt thou abide,
Nor speak to thy lord and thy husband and the man that rode thy Fire,
And mocked at the bane of King-folk to accomplish thy desire ?
I deem thou sickenest, Brynhild, with the love of a mighty-one,
The foe, the King's supplanter, he that so long hath shone

6885
Mid the honour of our fathers, and the lovely Niblung house,
Like a serpent amidst of the treasure that the day makes glorious."

Yet never a word she answered, nor unto the great King turned,
Till through all the patience of King-folk the flame of his anger burned,
And his voice was the rattling thunder, as he cried across the bed :

6890
"O who art thou, fearful woman? art thou one of the first of the dead?
Hast thou long ago seen and hated the tide of the Niblung praise.
And clad thee in flesh twice over for the bane of our happy days?
Art thou come from the far-off country that none may live and behold
For the bane of the King of the Niblungs, and of Sigurd lord of the Gold ? "

6895
Then she raised herself on her elbow and turned her eyes on the King :
"O tell me Gunnar," she said, "that thou gavest Andvari's Ring
To thy sister the white-armed Gudrun ! — thou, not thy captain of war,
The son of the God-born Volsungs, the Lord of the Treasure of yore !
O swear it that I may live ! that I may be glad in thine hall,

6900
And weave with the wisdom of women, and broider the purple and pall,
And look in thy face at the chess-play, and drink of thy carven cup,
And whisper a word in season when the voice of the wise goes up.
And speak thee the speech of kindness by the hallowed Niblung hearth.
O swear it, King of the Niblungs, lest thine honour die of the dearth !

6905
O swear it, lord I have wedded, lest mine honour come to nought,
And I be but a wretch and a bondmaid for a year's embracing bought !"

Till his heart hath heard her meaning at the golden bed he stares.
And the last of the words she speaketh flit empty past his ears ;
For he knows that the tale of the night-tide hath been told and understood.

6910
And now of her shame was he deeming e'en worse than Brynhild would.
So he turns from her face and the chamber with his glory so undone.
That he saith the Gods did evil when the mighty work they won,
And wrought the Burg of the Niblungs, and fashioned his fathers' days.
And led them on to the harvest of the deeds and the people's praise.

6915
And nought he sees to amend it, save the hungry eyeless sword,
And the war without hope or honour, and the strife without reward.

So alone he goeth his ways, and the morn to the noontide falls.
And the sun goeth down in the heavens, and fades from the Niblung walls,
And the dusk and the dark draw over, and no man the King may see.

6920
But Sigurd sits in the hall mid the war-dukes' company ;
Alone of the Kings in the Doom-ring, and the council of the wise.
By the street and the wharf and the burg-gate he shines in the people's eyes ;
Stately and lovely to look on he heareth of good and of ill.
And he knitteth up and divideth, with life and death at his will. 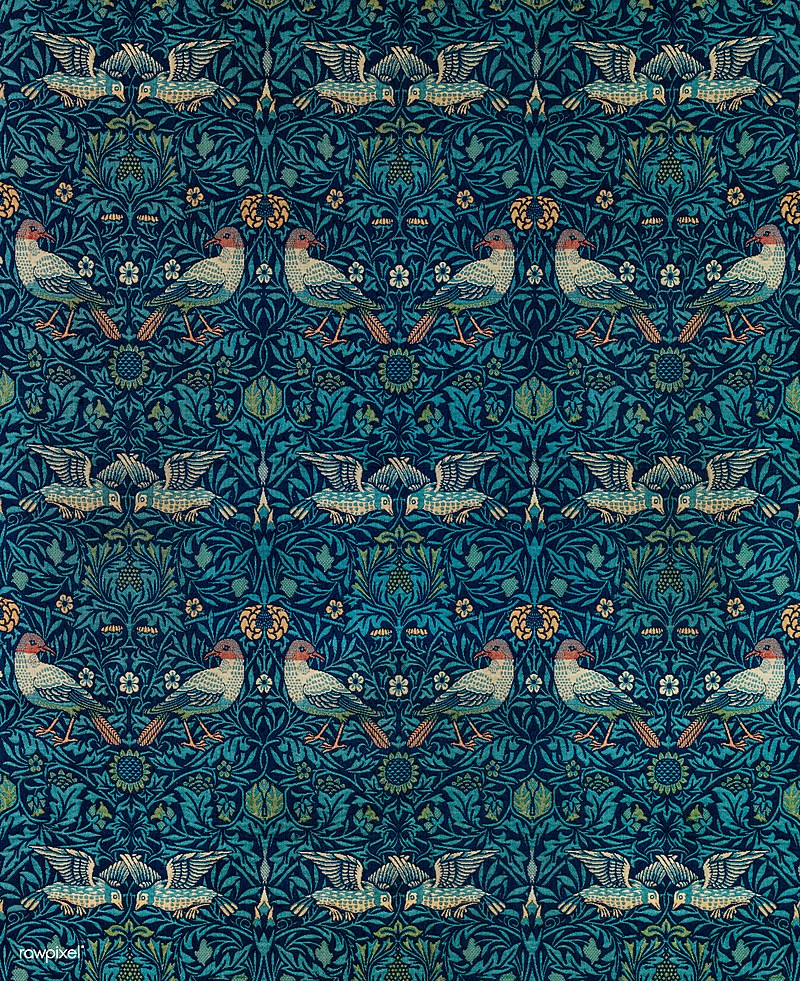