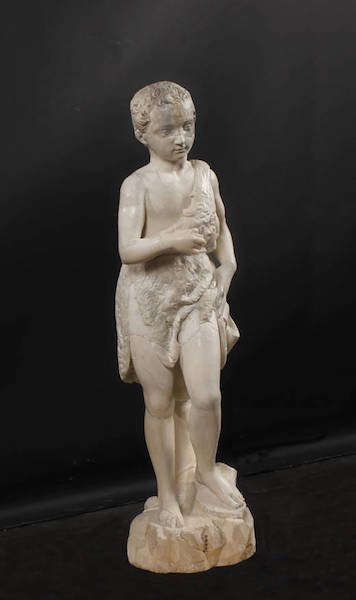 During the half year he spent in Florence in 1494, Michelangelo worked on two small statues, a child St. John the Baptist and a sleeping Cupid.

According to Condivi, Lorenzo di Pierfrancesco de' Medici, for whom Michelangelo had sculpted St. John the Baptist, asked that Michelangelo "fix it so that it looked as if it had been buried" so he could "send it to Rome ... pass [it off as] an ancient work and ... sell it much better."

Both Lorenzo and Michelangelo were unwittingly cheated out of the real value of the piece by a middleman. Cardinal Raffaele Riario, to whom Lorenzo had sold it, discovered that it was a fraud, but was so impressed by the quality of the sculpture that he invited the artist to Rome. This apparent success in selling his sculpture abroad as well as the conservative Florentine situation may have encouraged Michelangelo to accept the prelate's invitation.