Shamanic societies occasionally use drug overdose in the so called short path to provoke rebirth experiences, but here Michaux accidentally overdoses, shamanic societies well aware of the danger, have over the years placed many safeguards on this approach to protect the initiate, Michaux had no one to help him - a very frightening situation. 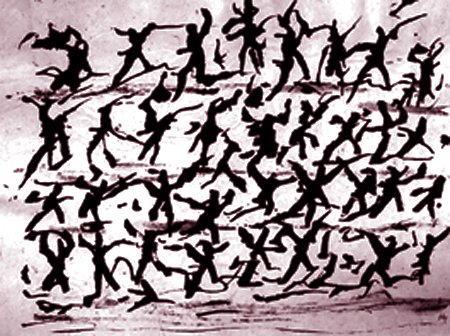 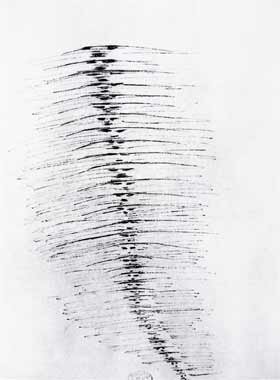 Caught, not by anything human, but in a frenzied mechanical agitator, a kneader-crusher-crumbler, treated like metal in a steel mill, like water in a turbine, like wind in a blower, like a root in an automatic fibre shredder, like iron in the tireless motion of a milling machine cutting gear teeth. But in my case I was also forced to look on!

Like a bird in the eddy of the propeller of a four engined plane, like an ant pinned under the crushing waters of a flood gate, like nothing I can think of, like nobody.

Intense beyond intensity, the struggle, and I, active as never before in my life, miraculously surpassing myself, but surpassed out of all proportion by the dislocating phenomenon.

The horror of it was that I was nothing but a line. In normal life one is a sphere, a sphere that surveys panoramas. One is in a castle, one is constantly going from one castle to another, such is the life of even the poorest man who is mentally sound.

Now only a line. A line that breaks up into a thousand aberrations. The whiplash of an infuriated carter would have been a relief to me. And no pity either. I, the accelerated line I had become, did not retreat, withstood each new slashing, was ready to form again, was on the point of forming again when the force, swifter than a meteor, falling upon me.......... It was agonising because I resisted.

What of emotion? I could not even retreat into emotion. The natural diffusion of the emotions that go straight to the heart …. did not take place......

To have become a line was a catastrophe … myself contracted to the thought. At the same time came the dislocating vibrations which 'rejected' the thought and after a few modulations that tore it to bits, eliminated it.

The thoughts struggled furiously, desperately against their disintegration. But each time they were worsted. It didn't take long. A bacillus under the radiation of radium salts understands this, but a man doesn't. He is protected from it.

How profoundly intimate it was I can never repeat often enough, and how an idea is your centre, and how destructible it is, how pliable, how easily disintegrated. No one who has not experienced it can know how easily ideas can be disintegrated.