Sitwell was born in London in 1892. He was educated at Eton, and enlisted in the Reserve Battalion of the Grenadier Guards in 1912. In December 1914 he was transferred to the 1st Battalion, later seeing active service with the 2nd Battalion, but blood poisoning in the spring of 1916 kept him out of further action for the rest of the war. He was an extremely prolific writer, publishing short stories, poems and novels throughout his life.  He died in 1969.

Corporal Elspeth Henderson and Sergeant Helen Turner (1941) – both women were awarded the Military Medal for staying at their post when the building they were in received a direct hit from a bomb during an air raid on RAF Biggin Hill. Although painted in Knight's studio in Malvern, the painting shows the two women on duty at their airfield. 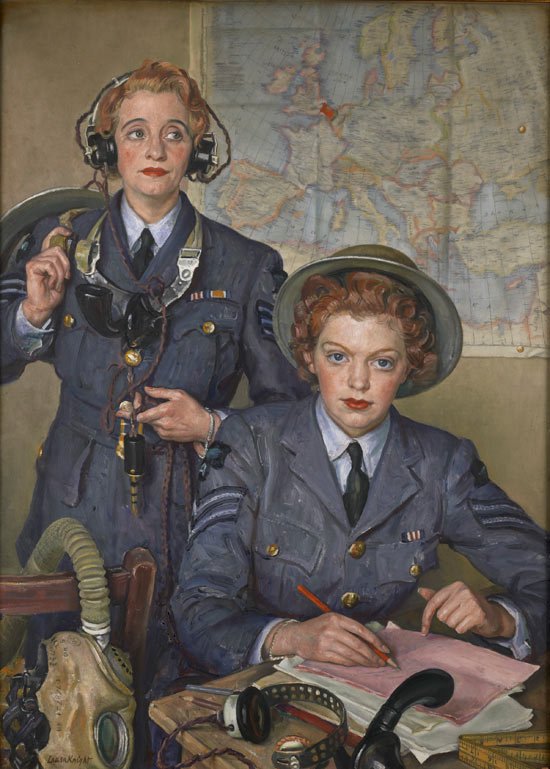 The long war had ended.
Its miseries had grown faded.
Deaf men became difficult to talk to.
Heroes became bores.

Those alchemists
Who had converted blood into gold,
Had grown elderly.
But they held a meeting,
Saying,
‘We think perhaps we ought
To put up tombs
Or erect altars
To those brave lads
Who were so willingly burnt,
Or blinded,
Or maimed,
Who lost all likeness to a living thing,
Or were blown to bleeding patches of flesh
For our sakes.
It would look well.
Or we might even educate the children.’

But the richest of these wizards
Coughed gently;
And he said,
‘I have always been to the front
— In private enterprise —
I yield in public spirit
To no man.
“I think yours is a very good idea
- A capital idea —
And not too costly.
But it seems to me
That the cause for which we fought
Is again endangered.
What more fitting memorial for the fallen
Than that their children
Should fall for the same cause?’
Rushing eagerly into the street,
The kindly old gentlemen cried
To the young:
‘Will you sacrifice
Through your lethargy
What your fathers died to gain?
Our cause is in peril.
The world must be made safe for the young!’
And the children _
Went . . .