Eva was born the youngest of three children on 30 January 1876 in Cheltenham.  She was the daughter of Wine Merchant and local historian Clarence Mason Dobell.  She volunteered to join the Voluntary Aid Detachment (VAD) as a nurse in World War I. Her experiences in the VAD prompted her to write poetry about wounded and maimed soldiers. She also took part in the morale-boosting work of writing to prisoners of war.  She died on 3 September 1963 at the age of 87.

Corporal J.M. Robbins (1940) – Robbins was awarded the Military Medal for the courage she showed in assisting the wounded when a shelter was directly hit by a bomb during an attack on RAF Andover. WAAC had requested that Knight paint Robbins as part of a group of medal-winning women, but Knight refused. 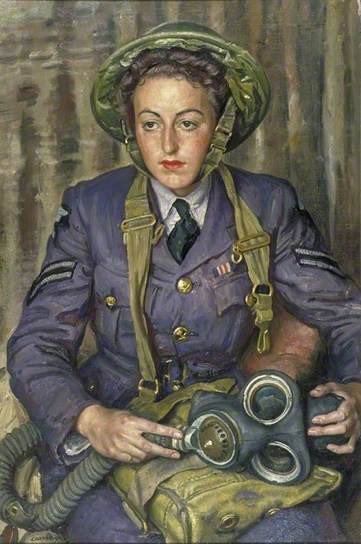 Through the long ward the gramophone
Grinds out its nasal melodies:
‘Where did you get that girl?’ it shrills.
The patients listen at their ease,
Through clouds of strong tobacco-smoke:
The gramophone can always please.

The Welsh boy has it by his bed,
(He’s lame ~ one leg was blown away.)
He’ll lie propped up with pillows there,
And wind the handle half the day.
His neighbour, with the shattered arm,
Picks out the records he must play.

Jock with his crutches beats the time;
The gunner, with his head close-bound,
Listens with puzzled, patient smile:
(Shell-shock - he cannot hear a sound.)
The others join in from their beds,
And send the chorus rolling round.

Somehow for me these common tunes
Can never sound the same again:
They’ve magic now to thrill my heart
And bring before me, clear and plain,
Man that is master of his flesh,
And has the laugh of death and pain.