Gregg Mozgala - Learns to dance with the help of Tamar Rogoff

Learning His Body, Learning to Dance

Gregg Mozgala, a 31-year-old actor with cerebral palsy, had 12 years of physical therapy while he was growing up. But in the last eight months, a determined choreographer with an unconventional résumé has done what all those therapists could not: She has dramatically changed the way Mr. Mozgala walks.

In the process, she has changed his view of himself and of his possibilities.

Mr. Mozgala and the choreographer, Tamar Rogoff, have been working since last winter on a dance piece called “Diagnosis of a Faun.” It is to have its premiere on Dec. 3 at La MaMa Annex in the East Village, but the more important work of art may be what Ms. Rogoff has done to transform Mr. Mozgala’s body.

“I have felt things that I felt were completely closed off to me for the last 30 years,” he said. “The amount of sensation that comes through the work has been totally unexpected and is really quite wonderful.”

Cerebral palsy, a neurological disorder in which the brain does not send the proper signals to the muscles, affects gait and other movements. Those with severe cases use wheelchairs.

Mr. Mozgala’s condition is less severe but disruptive enough to have caused him to walk for most of his life like “a human velociraptor,” as he put it: up on his toes, lower extremities turned in, seesawing from side to side to maintain balance.

“My knees were going in, my hips were totally rotated inward,” Mr. Mozgala said. “Gravity was just taking me down. So my upper body — arms and chest — overcompensated, curling back and up.”

That is how he looked when Ms. Rogoff saw him in March 2008 playing the male lead in a production of “Romeo and Juliet” by Theater Breaking Through Barriers, a group whose shows mix actors with disabilities and those without. Ms. Rogoff has often worked outside normal dance parameters — with prison inmates, for instance — and knew immediately that she wanted to try to create a piece for Mr. Mozgala.

“I didn’t know what I was going to do for him,” she said, “but I just knew he was inspiring to me.”

Originally, she envisioned a simple study, maybe 10 minutes long. Mr. Mozgala’s expectations when he agreed to the project were equally narrow: he said that he thought that she would either merely create a dance that made use of the physical abilities he already had or, after seeing his limitations, tell him, “Thanks but no thanks.”

Once they began working together, though, Ms. Rogoff realized that a broader approach was needed.

“Every time he tried to move in a way that wasn’t specific to his habitual pattern, he would fall down or just not know how to address it,” she said, “because he had a certain amount of patterning linked to his C.P., and I was asking him to step out of these patterns. I realized I couldn’t ask him to do that unless I supported it with a lot of body knowledge.” 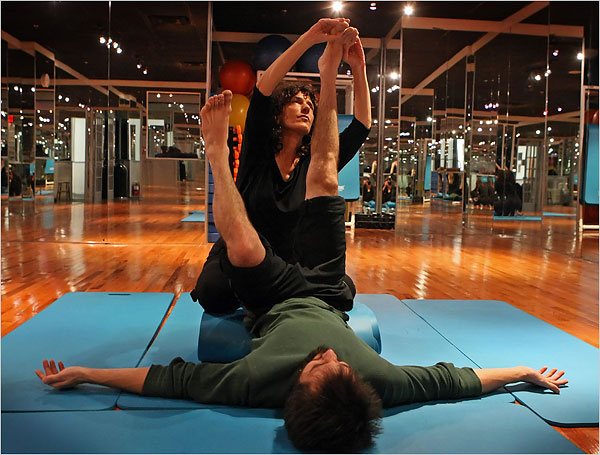 The choreographer Tamar Rogoff doing “body work” with Gregg Mozgala, who has cerebral palsy and for whom she has created a dance piece. Credit Andrea Mohin/The New York Times

She introduced Mr. Mozgala to a tension-releasing shaking technique, and it was immediately revelatory.

“My body just really took to it,” Mr. Mozgala said. “I did that for about 20 or 30 minutes, and when I stood up, I was walking completely differently. My feet were flat on the ground.”

They knew they were onto something. They began doing intensive one-on-one sessions they call body work, Ms. Rogoff using her knowledge of the body and dance-training techniques to help Mr. Mozgala “find” individual bones, muscles and tendons that he had had no command of before.

They started at the top and worked down — sternum, sacrum, knees — with Mr. Mozgala’s body and brain opening paths of communication that had not existed.

“There’s a lot of howling, screaming, crying, sweating,” Ms. Rogoff said. But “we often have these huge eureka moments.”

The other day, for instance, it was brain, meet lower-leg tendon.

“I said today, ‘I can feel my Achilles,’ ” Mr. Mozgala said. “You have to realize, I have never felt my Achilles before.”

Dr. Stephen A. Paget, chief of rheumatology at the Hospital for Special Surgery in Manhattan, who has been acting as a sort of sounding board for Ms. Rogoff during the project, said the changes being wrought in Mr. Mozgala support a relatively new way of thinking about neurological impairments.

“In the past, people thought that a neurological deficit was fixed and immutable,” Dr. Paget said. “Now there’s this whole concept of neuroplasticity: the neurological system has this ability to change itself and constantly grow.”

Apparently Mr. Mozgala’s has done just that. Before, his gait was extreme enough that it would draw stares on the street. (“The lurch,” he and Ms. Rogoff have come to call it.) Now, when he is fully concentrating, a passer-by might have to look twice to realize he has a disability at all.

Unlike his earlier physical therapists, he said, Ms. Rogoff has given him knowledge of his body and specific instructions that he can employ while going about his everyday life: “Sternum down, tailbone up,” and so on. 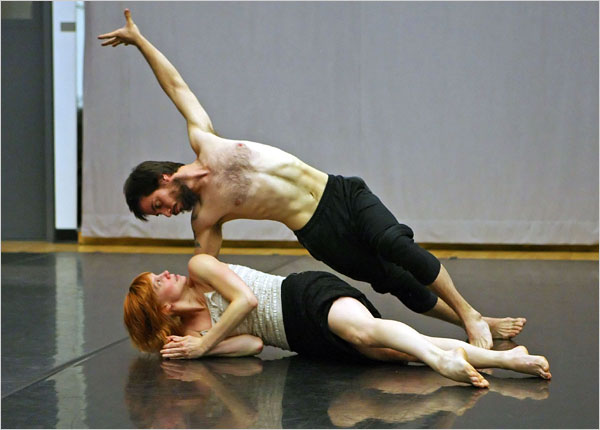 Gregg Mozgala rehearsing with Emily Pope-Blackman. She said it had been a slow process to find out how much force they could place on his body. Credit Andrea Mohin/The New York Times

“I have the key now,” he said. “Before, I was always being manipulated by someone else.”

Ms. Rogoff, whose father was a doctor, said that she knew little about cerebral palsy when she and Mr. Mozgala began, and that she had made a point of not learning too much. “That way I didn’t have any ideas about what he could and couldn’t do,” she said.

The physical changes Mr. Mozgala has experienced have had ramifications beyond the gym and the studio. Since high school, he has had a comical routine he would employ when he fell (“falling with style,” he called it) as a defense mechanism, to get people on his side; that is now gone.

So are the swings of self-image in which he would go from not caring if people were staring at him to feeling like “John Merrick on Fleet Street,” as he put it.

As Mr. Mozgala changed, so did Ms. Rogoff’s concept for the dance. The 10-minute study she had envisioned is now a work of more than an hour, with a cast of four. The piece has antecedents in “Afternoon of a Faun,” the Nijinsky ballet. Mr. Mozgala plays a 5,000-year-old Faun who turns up in a modern-day hospital as the work explores the intersection of science and art.

Emily Pope-Blackman, an experienced dancer who has a very physical, sensuous duet with Mr. Mozgala in the piece, had the task of helping him translate the progress he was making in the body-work sessions onto the dance floor. It was, she said, a slow process of “finding out between the two of us how much force, as he got stronger, we could risk: how hard could I pull him toward me; how much could he push me over without falling over himself.”

The piece, which also features Lucie Baker and Dr. Don Kollisch (a real-life family physician), is financed with a grant from VSA Arts, a nonprofit group that supports arts by people with disabilities. After its New York run, it will be seen at the VSA International Arts Festival in June at the Kennedy Center in Washington.

Ms. Rogoff calls Mr. Mozgala “the best student I’ve ever had.” Yet both of them are emphatic about what they have not achieved.

But now he doesn’t feel so enslaved by it.

“Everybody told me there was nothing I could do,” he said. “That’s just what you hear, from the time you’re 5 to adulthood. Tamar gave me an option.”

Whether the methods they have used can translate to others remains to be seen. But Dr. Paget said their progress held a message for anyone with a neurological impairment.

Other ill or disabled person