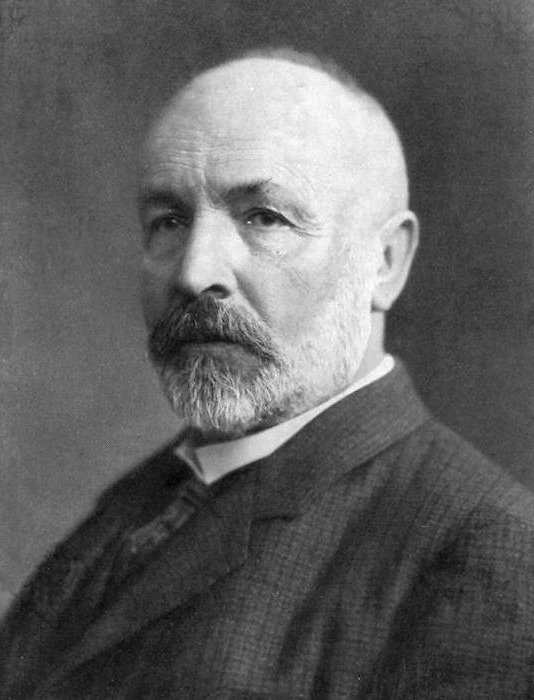 Georg Ferdinand Ludwig Philipp Cantor (March 3/February 19] 1845 – January 6, 1918 was a German mathematician, best known as the inventor of set theory, which has become a fundamental theory in mathematics. Cantor established the importance of one-to-one correspondence between the members of two sets, defined infinite and well-ordered sets, and proved that the real numbers are "more numerous" than the natural numbers. In fact, Cantor's method of proof of this theorem implies the existence of an "infinity of infinities". He defined the cardinal and ordinal numbers and their arithmetic. Cantor's work is of great philosophical interest, a fact of which he was well aware.

Cantor's theory of transfinite numbers was originally regarded as so counter-intuitive – even shocking – that it encountered resistance from mathematical contemporaries such as Leopold Kronecker and Henri Poincaré and later from Hermann Weyl and L. E. J. Brouwer, while Ludwig Wittgenstein raised philosophical objections. Cantor believed the theory had been communicated to him by God.

Cantor's recurring bouts of depression from 1884 to the end of his life have been blamed on the hostile attitude of many of his contemporaries. The harsh criticism has been matched by later accolades. In 1904, the Royal Society awarded Cantor its Sylvester Medal, the highest honor it can confer for work in mathematics.

David Hilbert defended it from its critics by famously declaring: "No one shall expel us from the Paradise that Cantor has created."

….it is certain that Georg Cantor could not have foreseen a result of which he himself said

Cantor
"... the transfinite species are just as much at the disposal of the intentions of the Creator and His absolute boundless will as are the finite numbers"