Edmund Blunden grew up in Kent, where he developed a deep love for, and knowledge of the natural world.  He described himself as 'a harmless young shepherd in a soldier's coat'.

An officer in the Royal Sussex Regiment, he served for particularly long periods of duty on the Western Front and fought at Ypres and Passchendaele. In 1916 he was awarded the Military Cross for 'great courage and determination when in charge of a carrying party under heavy fire'.

In 1919 he took up his place to study at Oxford, though settling into civilian life proved difficult. The mental scars of his long war experience were slow to heal. His 1928 memoir, Undertones of War, is a vivid account of the trenches:  'Men of the next battalion were found in mud up to the armpits, and
their fate was not spoken of; those who found them could not get them out. The whole zone was a corpse, and the mud itself mortified.' After the war he held university positions in Oxford, Tokyo and Hong Kong, and in 1966 succeeded Robert Graves as Professor of Poetry at Oxford.
Blunden edited early collections of the work of Wilfred Owen and Ivor Gurney, and wrote about poets who had influenced him, including John Clare and Thomas Hardy.
At Oxford he was tutor to Keith Douglas, the most accomplished soldier-poet of the Second World War. 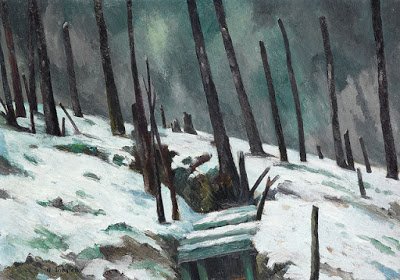 I have been young, and now am not too old;
And I have seen the righteous forsaken,
His health, his honour and his quality taken.
This is not what we were formerly told.

I have seen a green country, useful to the race,
Knocked silly with guns and mines, its villages vanished,
Even the last rat and the last kestrel banished -
God bless us all, this was peculiar grace.

I knew Seraphina; Nature gave her hue,
Glance, sympathy, note, like one from Eden.
I saw her smile warp, heard her lyric deaden;
She turned to harlotry;- this I took to be new.

Say what you will, our God sees how they run.
These disillusions are His curious proving
That He loves humanity and will go on loving;
Over there are faith, life, virtue in the sun.