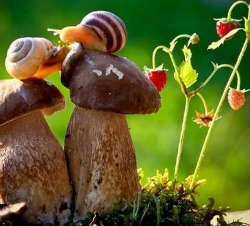 The old name for the common snail with its twin horns, was 'Dodman'.  'Dod' is also a frequent name found on ley lines.

Snails take on the symbolism of the spiral.

The Order of Creation was a spiral  commencing from the centre and the Ultimate Intelligence and proceeding outwards system by system.  Thus a spiral can also be used in this context as representing creation.

Any spiral where movement has ceased - for example in the shell of a snail -  thus represents a sort of  stagnant state.

A Dictionary of Symbols – J E Cirlot
In Egyptian hieroglyphs the snail is associated with the action of the microcosmic spiral upon matter.  Modern scientific research in morphology tends to verify this intuition, not only in this particular case but also in all cases where the spiral scheme appears in nature